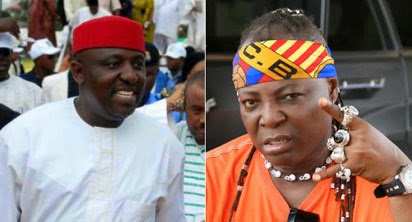 A requiem mass organised for the late Socrates of the Supreme Court, Justice Chukwudifu Oputa at his country home in Oguta Local Government Area of Imo State was disrupted yesterday, when the first son of the former erudite judge, Charles Oputa, a.k.a Charley Boy prevented Governor Rochas Okorocha from paying tribute to his father.

Eye witnesses said that the mass which was conducted by the Catholic Bishop of Sokoto Diocese, Rt Rev. Matthew Hassan Kukah at the Sacred Heart Catholic Church, Oguta, went on smoothly until Okorocha was permitted by the Bishop to pay his tribute to the fallen judge.
However, Chief Okorocha, was stopped midway into his speech, by Charley Boy who was visibly infruiated with Kukah for granting the governor the permission to speak. He walked up angrily to the altar and snatched the micro-phone from the governor, to the embarrassment of all the dignitaries present.
It was a disgrace to the governor.
Among eminent Nigerians present at the church service included representative of President Goodluck Jonathan, the Secretary to the Government of the Federation, Senator Anyim Pius Anyim, Governors Willie Obiano (Anambra), Theodore Orji (Abia); the Deputy Speaker of the House of Representatives, Chief Emeka Ihedioha and former governors of Anambra State, Senator Chris Ngige and Mr Peter Obi respectively.
Also present, were the former governor of Imo State, Ikedi Ohakim,, Senator Uche Chukwumerije and the Minister of Labour, Chief Emeka Wogu, the state Police Commsiioner, Almajid Ali and the Divisional Police Officer, DPO, for Oguta, Ikembuchukwu Abugu.
The intervention of Bishop Kukah could not assuage Charly Boy’s anger as he insisted that no politician would take advantage of his father’s burial to score “cheap political” goals. He insisted that the Governor should not speak at the event.
However, obviously embarrassed by Charley Boy’s action, the Governor and members his entourage hurriedly left the church service mid -way, despite entreaties from the officiating Bishop Kuka for them to stay on.
It was gathered that Charly Boy’s action followed a recent statement by Government House, Owerri, to the effect that the Oputa family was given N20 million to assist it in the burial arrangements.
Sources told Saturday Vanguard, however, that “the family never received a dime from either Okorocha or the state government, not to talk of the alleged N20 million said to have been made available to them,’’ as reported by a section of the media.
Meanwhile, the state government has described the incident that played out at Sacred Heart Catholic Church, Oguta, as “ugly and regrettable.”
According to a statement by the Seniour Special Assistant, SSA, Media, to Governor Okorocha, Mr Sam Onwuemodo, “It is highly regrettable that the son of the late Justice, Mr Charles Emeka Oputa, aka, Charly Boy, threw caution to the wind and turned the church service into a political theatre that saw him acting or playing out the script he drafted in Abuja with some Imo politicians, who have remained cowed by the overwhelming popularity of Governor Rochas Okorocha.”
Onwuemeodo insisted that the state government made “substantial financial input and also organized a special day of tributes for the late Justice Oputa at the expense of state government with Charly Boy also present with other members of the family.
”We condemn that ugly incident and also wish to advise politicians from the state to stop heating up the polity over power since God is the giver of power. In 2015, God will decide who will be governor of Imo State and when God decides that, there is nothing anybody can do about it.” He did not make to reference to the N20m said to have been given to the family.

*There is prolly a misunderstanding somewhere oh..maybe the money has entered someone else’s pocket…people can be greedy.I am sure they will settle this amicably.
Charly boy sha..lol