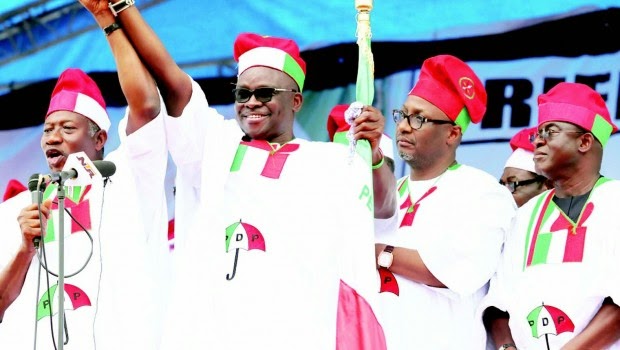 The Governor-elect of Ekiti State, Ayo Fayose, has declared that but for President Goodluck Jonathan’s who insisted on party primaries, he would have lost out in the consensus arrangement among the partymen.Fayose, who was received at the national headquarters of PDP Reloaded in Abuja on Tuesday, also declared that the ego of the All Progressives Congress will be bruised in the oncoming Osun governorship election that comes up on August 9.

Fayose, who was accompanied by minister nominee, Sen. Adedayo Adeyeye and Senator Ayo Arise, said: “If not for Jonathan for standing on his feet, consensus would have defeated me.

He further pledged to work for Jonathan ahead 2015, warning also that “we will bruise the ego of the opposition. In Osun we will bruise their ego. We will make Jonathan and PDP proud.”He claimed that “now it’s difficult to rig; that is why APC is confused.”This comes as ministerial nominee, Sen. Adedayo Adeyeye, said former President Olusegun Obasanjo was the one that withdrew his name from ministerial list after the late President Umaru Musa Yar’adua penciled his name for a ministerial position in 2007. He also promised to work for Jonathan in 2015.