A ritualist den owned by one pastor Ernest Nwankwo, the General Overseer of Holy Family Ministry a.k.a House of Mercy was yesterday June 25th uncovered at Ogolonto area in Ikorodu, Lagos, with 8 victims rescued.

According to Vanguard, the den was discovered after a failed attempt by a woman identified as Mrs Rosemary Chukwu, a member of Pastor Nwankwo’s church, to kidnap her neighbor’s 7 year old son, Emeka Emmanuel to the den for rituals. 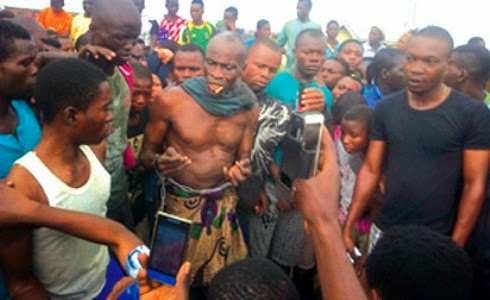 Sources in the area said around 6.30 am yesterday, Mrs Chukwu lured the little boy who was on his way to fetch water from a well down the road and took him to her house where she locked him in the toilet. To keep her neighbors from hearing the little boy’s screams for help, Chukwu then instructed her own children to begin a prayer session which they did, shouting on top of their voices. Continue…

Trouble however started when the boy’s mother who stays four buildings from Mrs Chukwu raised alarm after she could not find her son. A search for the young boy began which Mrs Chukwu also partook in. Minutes into the search, Mrs Chukwu was said to have excused herself, went into her house and then came out with a box on her head, saying she was travelling. Suspecting foul play, some of the area boys instructed her to put down the suitcase which was opened and the unconscious body of the 7 year old boy was discovered.

A resident of the area, Oyetoye Gbemi who spoke with Vanguard said the area boys descended on her and she confessed it was her pastor who sent her

“She told us she was travelling to the village. But one of the area boys who was among the search party, ordered his colleagues to search the box. Immediately she heard that, she flung the box away and took to her heels. We all suspected something was amiss. When the box was opened, Emmanuel was found inside, half dead. The area boys descended on her and stripped her naked. On interrogation, she said her pastor, the General Overseer of Holy Family Ministry a.k.a House of Mercy, asked her to bring the boy. The area boysfollowed her to 319, Lagos Road, Ikorodu, where the church is situated, where they saw her pastor waiting for her. But on sighting the crowd, he took to his heels. But for the arrival of Policemen from Owutu division, the woman would have been lynched. The angry mob also attempted to set the church ablaze but were also prevented by the policemen. They, however, succeeded in torching some parts of the property.” he said

In the process of chasing the fleeing Pastor and burning some part of the church building, area boys forced open a door to a building at 7, Oshodi Street, which was directly at the back of the church building and owned by Pastor Ernest. To everyone’s amazement, men and women, eight in number, chained and looking frail were found in the building. The captives upon interrogation said they were kidnapped from various places like Ogun, Anambra, Bayelsa and Oyo states. One of the captives, a 50 year old woman said she was kidnapped while returning from a night vigil. One of the rescued victim, 52 year old man pictured above without a shirt said he was a commercial bus driver and was kidnapped two years ago.

Residents in the area said the building owned by the pastor had always been under suspicion as no one ever saw anyone coming out or going in during the day. They said most of the activities carried out in the building is usually done at night.

Police sources confirmed the arrest of Mrs Chukwu while her pastor is currently on the run.