Suarez Finally Reveals Why He Bit Chiellini, SEE What He Said! (LOOK) 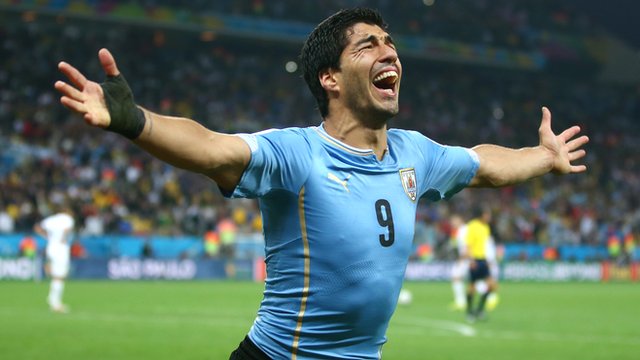 Uruguay’s top striker, Luis Suarez has finally spoken on his alleged biting of Giorgio Chiellini in the match between Italy and Uruguay at the ongoing 2014 FIFA World Cup in Brazil.

The Liverpool striker was caught on camera biting the Italy defender during the match the South Americans won 1-0 courtesy of a solitary goal scored by Diego Godin.

While commenting on the incident in an interview conducted by local reporters after his country’s win which took them through to the knockout rounds, Suares played down the latest incident as ‘just something that happens on the pitch’.

The player who plays in the English Premier League, and who has twice been banned for biting an opponent, said: “These situations arise on the pitch, I’ve collided with his shoulder. It drove me a little crazy too, but these things happen on the pitch. There’s no need to make a story out of it.”

However, Balbi has confirmed that they are working on a defence and has insisted the confrontation has been blown out of proportion as a result of the Liverpool man’s history.

Football governing body, FIFA, has confirmed disciplinary proceedings have been opened against the Uruguayan forward, who could be banned for up to two year over the incident.

FIFA is expected to give a verdict on the alleged Suarez biting incident on Thursday, 26 June, 2014.

Meanwhile, many football fans and pundits are united in their view Suarez should receive a lengthy ban for yet another apparent biting offence.

Former England defender Danny Mills has gone a step further – insisting the Uruguayan should be ‘thrown in jail and locked up forever’.

He said: “It has to be the longest ban in football ever. A worldwide ban, not just an international ban,’ he said.

‘It is the third time it has happened and it is a clear bite this time, in a tournament of this magnitude, the most watched tournament in the world. They have got to throw him in jail and lock him up forever.”

Why We Lost To Argentina – Keshi Speaks