Tiwa Savage Loses Her Cool At Airport, Descends On A Female Staff – See What Happened!

Share on FacebookShare on Twitter
Seems delectable artiste and rave of the moment, Tiwa Savage is a no-nonsense lady who doesn’t seem to spare anybody who angers her. Cos Punch is reporting that at the Murtala Mohammed International Airport last Monday, Saturday Beats watched how Tiwa descended on a member of staff of the Nigerian Aviation Handling Company who she said was “rude” to her. 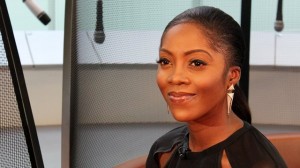 The Eminado crooner, looking chic in her black and white ensemble, was seen arguing and quarrelling with the NAHCO staff and her action drew a little crowd. The NAHCO lady was unfazed
by Tiwa’s fame and didn’t allow her to intimidate her as she told the people around that she wasn’t rude to Tiwa.

“I was not rude to her. I only told her to go and board since she had checked in her luggage. I wonder how that could mean that I was rude to her,” Saturday Beats overheard the NAHCO staff saying.

Not giving the lady another look, Tiwa eventually entered the boarding gate alongside her colleagues.
Tiwa and some other Nigerian artistes, Saturday Beats gathered, were on their way to Mauritius on board an Emirate flight.
Recall that it was reported few months ago that the singer had an encounter with a policeman and she allegedly removed his beret from his head.
-Lailasblog

Family is everything -Tiwa Savage and her son, Jam Jam have a nice time with her mother (Photos)

Again, Wizkid grabs Tiwa Savage’s butt on stage as she hugs him from behind (Video)