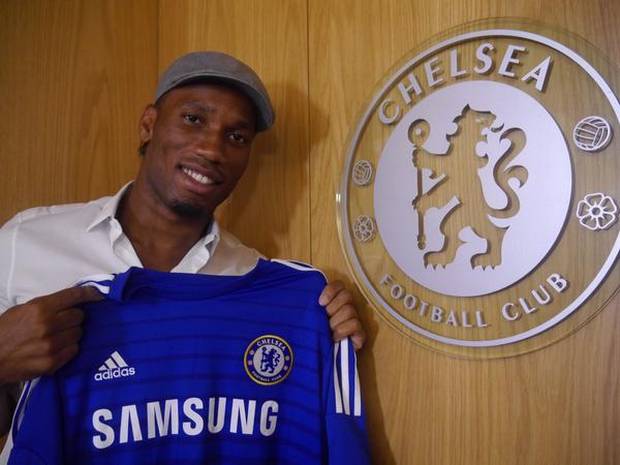 Didier Drogba just announced on his instagram page that he’s back at Stamford Bridge. Chelsea manager Jose Mourinho revealed recently that he wanted Didier Drogba back, and he’s made it happen.

“We want to win matches and win titles and Didier is one of the best strikers in Europe. He is still very adapted to the needs of the Premier League and we are thinking about it in a non-emotional way. If I bring him back, and the decision has to be made soon, it is because as a player he has qualities to make the team stronger. The team is not about the eleven. It is about the different options and as an option I would not say no about the possibility.’Mourinho said.

Chelsea have confirmed the re-signing of Didier Drogba on a one-year contract in a move which reunites the Ivorian with Jose Mourinho just two seasons after the striker left Stamford Bridge.

The Blues have already recruited Diego Costa from Atletico Madrid for £33m but Mourinho but will undoubtedly go out of his way to accommodate Didier Drogba into his plans.

The 36-year-old’s last touch in a Chelsea shirt was the penalty which gave the Londoners their first and only taste of Champions League glory in 2012.

He scored over 150 goals during an eight-year stay in London before leaving for Chinese side Shanghai Shenhua in the summer of 2012.

Mourinho, who also couldn’t resist the temptation of returning to Stamford Bridge last year, admitted earlier this week that he would be interested in re-signing the player he brought to English football in 2004.