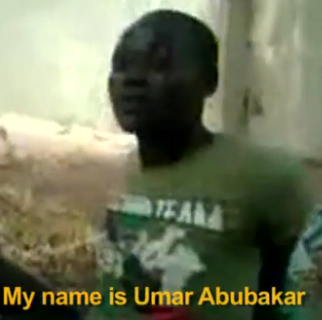 The victim, who was extensively interrogated before his gruesome killing, identified himself as Umar Abubakar, disclosing that he was a member of Section 9 of the Nigerian armed forces engaged in counter-insurgency measures against Boko Haram.

In the video clip, the insurgents asked their victim to state his monthly pay to which he replied N40,000. He also disclosed that his commanding officer was a 2nd lieutenant. The insurgents displayed their victim’s identity card, chanting that the world should know that Allah had given them an enemy.

This is too sad. Just sad. Couldn’t bring myself to watch the video.

“So you were sent to kill Boko Haram? And you are serving the state instead of Allah? We are members of Jama’atu Ahlis Sunna Lidda’awati Wal-Jihad and Allah has given us an infidel today,” one of the Islamist sect’s leaders said in the video.

Thinking that reprieve would come his way, the captured military operative proclaimed himself a Muslim of Jama’atu Izalal extraction, but the insurgents, who spoke Hausa mixed with Kanuri, dismissed his plea. Their leader said: “No amount of prayers will save you, we will judge you according to the Quran.”

To the chants of Allahuakubar, the insurgents decapitated the hapless officer. After beheading their victim, the terrorists held up his severed head in jubilation as one of them used a mobile phone to film the gory scene. The victim’s headless body can be seen on the ground in a pool of blood, his hands tied with a rope.