Woman sleéps with her daughter’s boyfriend, fights her publicly (Look)

Share on FacebookShare on Twitter
Immorality is reigning supreme in the land, the family is the first casualty. How else are we suppose to describe this open madness between a mother and her own daughter? Total show of shame! 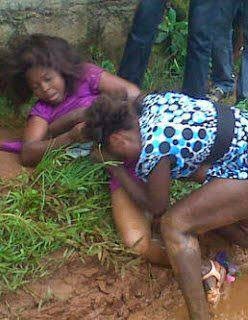 As you read this, a 42-year-old woman in Asaba, Delta State, identified as Monica has threw caution to the wind as she engaged her 17-year-old daughter in a physical fight for allegedly snatching her boyfriend.

Sources in the area said that the mother was alleged to have snatched the daughter’s boyfriend, who works in one of the oil companies in Warri. The guy is rich!

Eyewitness said that a shocking scene was created around St. Brigid’s Girls College in Asaba, Delta State, on Sunday afternoon as the mother and daughter exchanged blows…

As both of them engaged themselves in a fight, motorists on the popular busy road stopped to watch what one of them described as “a big show of shame”.

The daughter was said to have become furious when she heard that her boyfriend was caught pants down with her own mother in an hotel in the state. The trouble between mother and daughter became aggravated when the lover boy began to act in a strange manner towards the girl. It seems the mother is sweeter than her daughter. Double wahala!

While the show of shame lasted, the daughter was said to have called her own mother a shameless woman and a prostitute, who drove their father (her husband) out of the house with her unbridled quest for sex.

According to Leadership, one of the mother’s relation also blamed her for being so shameless in her acts.