19 yr old rap£s chicken to death in Ondo – See how it happened! (Look)

Share on FacebookShare on Twitter
A 19 year old welder apprentice was caught yesterday August 19th after having sex with a chicken at the Continental area of Akure, the Ondo state capital. 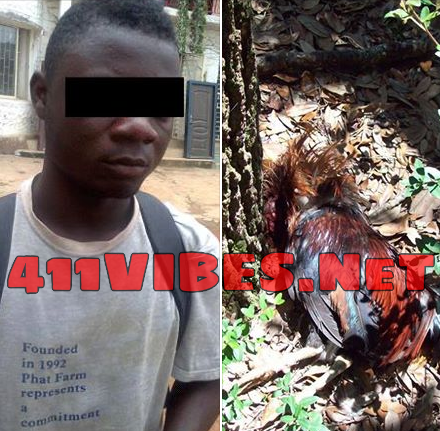 According to reports by Vanguard, the boy was discovered to have committed the act after the owner of the chicken, Mrs Stella Akintola, who is the boy’s neighbor and reared chickens in the compound, heard her chickens making noise inside their pen and decided to go and find out why they were restless.

When she got to her hen pen, the young man surfaced from a corner and said he had stomach upset and was on his way out of the compound toilet. Mrs Akintola not suspecting anything then moved to use the compound toilet where she discovered one of her chickens lying dead in the toilet. When she tried to raise an alarm, the young man quickly appealed to her not to shout confessing that he was responsible for the chickens death and promised to replace the dead chicken. However when she examined the chicken with some of her neighbors, they discovered that the young man had actually had sex with the chicken until it died.His neighbours said it wasn’t his first time, that he’d been driven out of his village, Afo in Ose council area of the state after being caught having sex with a goat. He moved out of the village to stay with his brother in Akure where he committed the same act.When interrogated, the suspect said a spirit actually directed him to commit the crime.

“I was already sleeping when a spirit just came upon me and directed me to go to the back of the building. I did not know what I was doing again until when I discovered that I had slept with the hen.” he said