Check out this “Gold Range Rover” with 666 number plate + See how much it is worth! (PHOTOS)

A wealthy Arab has replaced Range Rover’s normal design with a customised body-kit which includes oversized bumpers, a bonnet vent with a black and gold wrap.

The car, with the registration plate ’666′, has been flown over to the UK by its Saudi owner when the multi-millionaire decided to escape the desert temperatures for a holiday. 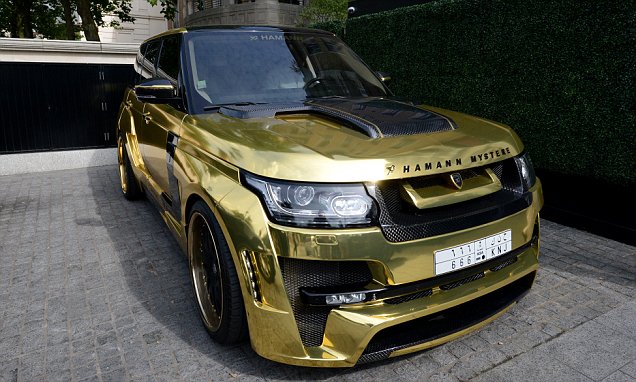 Scroll down for more photos

The ‘Mystere’ is a £150,000 (about N41m) version of Range Rover which has been given an overhaul by German tuning house Hamann.

According to an eyewitness, there are a lot of Range Rovers in London, but this one is different. “You can’t miss it. It is amazing that the owner, who must be quite rich, decided to have it wrapped gold coloured. It is so eye-catching, but I don’t think it will be winning any style awards.”

Last year, residents of West London complained the capital was being inundated with supercars, which they claimed were leading to unruly driving.

Petrol-heads were seen driving round wealthy areas of the city in Lamborghinis, Ferraris and Bugattis and attracting bands of camera-carrying youngsters, known as the Carparrazzi.

A gold and white Bugatti

A Lamborghini Murcielago and a Koenigsegg CCXR