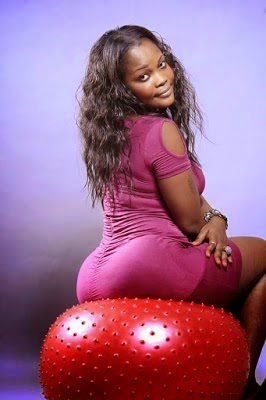 The story that actress/musician, Ella Martins and Genevieve Nnaji, are lesbian partners was actually broken by an online magazine last year and it created a big buzz. Though both Ella Martins and Geneiveve swiftly reacted to squash it all but it would seem the echoes are still being heard as Ella revealed in this chat that she is still being haunted by the scandal. Here’s what she told Potpourri about the saga:You became popular in Nigeria after that allegation of lesbianism between you and Genevieve. How did that little scandal affect you and your career?Yes, it has affected my emotional life, because everybody now believes I am in a relationship with Genny and  my family is not happy about it. It has really affected my career and image at home.What actually happened between you and Genny that sparked the allegation?Hmm, you know I speak more of French than English, so, it is a little hard for me to express myself fully. What happened is that Genny and I were in a club in Lagos and her phone got missing. Later, I think a paparazzi or someone got hold of it and started sharing some contents about me and Genny online. I don’t see anything abnormal in the pictures but people started talking that we must be lesbians and all. What kind of pictures are you talking about?
As normal persons and friends, we do take normal pictures at home and in other places but I don’t know why the online magazine showed Genevieve and I kissing, I am surprised and don’t know where they got those pictures from.

So, you and Genevieve were never kissing each other in any pictures you took together?
We kissed, but it was nothing extraordinary, it was normal kiss between girls. I mean girls do kiss each other normally, even guys do too. When I was dating Fally Ipupa we used to kiss and now that we are separated and are good friends we still continue kissing like we used to. My fear is I receive strange calls saying that in a few days’ time they will be releasing more pictures about us.

You still received calls over the incident?
I am a very popular figure in my country and a lot of people are jealous of me. So many of them would like to see me go down and this may be a good excuse for them to start something.

When they call you on phone, do they ask for anything or sound like blackmailers?
No, just to say they will expose our dirty secret and I don’t have any dirty secret.

If you have no dirty secret why are you now scared?
You don’t understand, even the pictures they released online was worked on, adulterated to make it look different from the actual pictures. We kissed as normal girls, not as romantically or sexually as they projected in the pictures posted online.

What is the relationship between you and Genevieve Nnaji?
We have been good friends since 2004. We met when Kennis Music organised an award and since then we have been good friends. We talk often and whenever I am in Lagos we meet up and have fun as friends. I have had no peace since the pictures leaked online. Everybody now calls me Genny’s wife back home.

Sincerely, are you and Genevieve Nnaji sexually involved?
No, never. I am neither a lesbian nor is Genevieve. We are just two close friends, showing profound emotions for each other by kissing.

It seems the Beninoise actress is staying away from Genny these days to avoid further speculations.

Wife of Late Ebola Victim, Decontee Sawyer – “I don’t want any more families going through what I’m going through”

Unbelievable! Nigerians have started dragging Burna Boy because of a track in his new…