Cure for mouth odour – Two teenagers from Nigeria,Eveshorhema Samuel-Alli and Ibukunoluwa Oladeindethat proudly represented Nigeria at the 2014 Intel International Science and Engineering Fair in Los Angeles, California, USA, have bagged an award as a result of their research work on Halistosia a.k.a mouth odour. 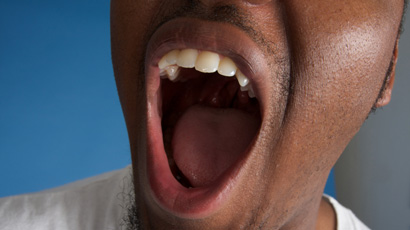 HALITOSIS or bad breath, is an unpleasant odour of the mouth present on exhaled breath. According to medical experts, this very embarrassing condition which can be acute (occasional) or chronic (long-lasting), could be caused by several factors including food, poor dental hygiene, tobacco products, health problems, dry mouth, mouth infections, dentures or braces and medications.Bad breath has caused otherwise well qualified people to lose employment opportunities, caused job losses, and friendships/marriages to crash. In their search for a solution, the two students ofDoregos Private Academy, Ipaja, Lagos, carried out research on African walnut (Coula edulis), a member of the tree nut family common in Nigeria. At the end, they discovered that apart from its cancer-fighting properties, rare antioxidants, benefits for the heart and circulatory system, weight control, improved reproductive health in men, brain health and diabetes, walnut could also cure bad breath.According to Eveshorhema, the idea for this project came while on a school trip to a rural area in Nigeria where the host community served them walnuts.“When I woke up in the morning, I hadn’t brushed my teeth yet but my breath was already fresh. Then I remembered I had eaten walnuts the previous night.” To confirm her suspicion, she ate more nuts the following night and awoke with fresh breath again and that made them to carry out further research.“This project actually won us a Life Science Award of $1,000 in the Medicine and Health Science category, courtesy, Sigma Xi Scientific Research Society.”The experiment:“The Halitosis project has to do with mouth odour and we used a common Nigerian snack, the walnut, to cure mouth odour because it is a very embarrassing problem. Your best friend won’t tell you that your mouth is smelling so we had to find a solution to it.Consent forms“We conducted this experiment using 35 volunteers who were students of our school. we sent out parents consent forms and when we received the parents’ consent, we continued the experiment. The volunteers were divided into four groups. The duo then made two different walnut products.Walnut chewing gum: “We made walnut chewing gum by adding resins and sucrose to chopped walnuts.Walnut mouthwash: “Also, we made a walnut mouthwash mixing chopped walnut, water and 10 per cent lime as preservative.One group was given whole walnuts to eat; thev second group was given walnut chewing gum; the third was given walnut mouthwash while the last group was given nothing so they were the control group.“They took the walnut morning and night. We then observed them and recorded the results. They did not brush their teeth for the duration of the experiment. They were going only on walnut so we would be able to see the improvement,” said Eveshorhema Samuel-Alli.“After this, we conducted an experiment using Lead tri-oxo nitrate (v) in which the volunteers were made to blow bubbles into a solution of lead nitrate and water before and after the experiment.“Before they took the walnut and walnut products, they were made to blow bubbles into the solution and then we recorded how long it took to turn the solution black. What turns the solution black is hydrogen sulphide and that is what causes mouth odour. So if it takes a short time, that means the mouth odour is actually very bad. Then after the experiment, they were also made to blow bubbles into the solution and this time, it was noticed that there was significant time lapse before the solution turned black.When the control group who had bacteria in their mouths, blew bubbles into the solution, it turned black while it remained clear when the other groups blew bubbles into it. So we knew that the walnut was actually working to cure halitosis.”Bacterial culture:From the results obtained, the duo suspected that some chemicals like alkaloids, oleic acid and tannins in the African walnut must be killing some of the odour-causing bacteria in the mouth. So they swabbed the mouths of each volunteer, grew the bacteria and counted the number. They found out that those who had the walnut treatment had fewer bacterial load.