President Jonathan and Obasanjo Meet In Aso Rock (See Why)

Share on FacebookShare on Twitter
Former president, Chief Olusegun Obasanjo, on Wednesday, met with President Goodluck Jonathan in Abuja over security matters.
Obasanjo stated this to newsmen shortly after he arrived back in Abeokuta, saying that the visit was on the invitation of Mr President. 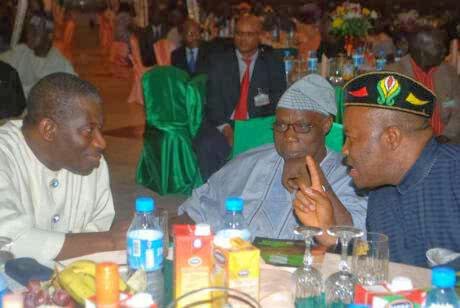 Obasanjo said he insisted that the meeting should hold at the Presidential Villa, as a mark of respect for the office of the president, adding that it discussed security situations in the country.
Some days back, OBJ likened the present state of the nation’s economy to the dark days of the late General Sani Abacha, and also commended the Federal Government on the fight against the Ebola virus disease.
He promised that he would continue to make himself available on any issue concerning the growth of the country.
Obasanjo said: “yes, I can confirm that I met with Mr President on his invitation. In fact, he had wanted to come down to Abeokuta, but as a sign of respect to the office of the president, I had to go. We had discussion on the country’s security issues and that is all.
-StellaDimorkokus