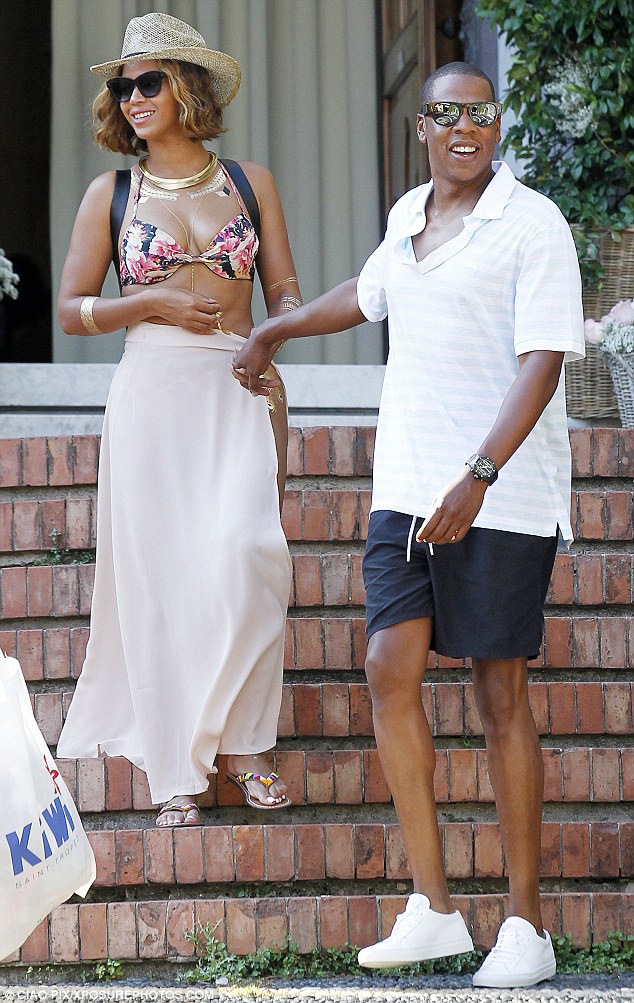 Queen Bey looked like a proud mother as she took photo after photo of daughter Blue Ivy aboard a yacht while on vacation in Portofino, Italy, with her family on Saturday.Earlier in the day the 33-year-old singer looked to be very in love with her husband Jay Z as the couple took in the town’s charming streets while arm-in-arm.

And the Single Ladies singer did her best to look fetching for her On The Run tour mate as she showed off her curves in a bikini and high-slit skirt.

Bey, who turned 33 on Thursday, paired her white pareo with a colourful bikini top and covered her blonde tresses with a straw hat.

She accessorised with a statement gold neck cuff and had a gold chevron pattern painted on her collarbone, along with gold painted bangles above and below her elbow and a puff of gold powder around her ribcage.Her hunky 44-year-old husband couldn’t have looked happier as he was pictured with his arm around his lovely wife’s shoulders.

Meanwhile, given his loving display in Portofino, it seemed the 99 Problems rapper didn’t have a care in the world.

They seemed to put to rest ,UsWeekly report in August that the Carters would split soon after their Paris concert dates and end things amicably.

They were reportedly going to follow Gwyneth Paltrow and Chris Martin’s plan of consciously uncoupling with style and honour,This couple look genuinely happy..

Both stars wore dark glasses to shield their eyes from the sun.

There were plenty of public displays of affection as the loved up couple checked out the merchandise in stalls and shops in the picturesque, cobble-stoned town.

At one point, Jay Z gallantly turned to help his Queen down a brick staircase, making sure she didn’t trip on the long skirt.

They joined a group of their friends for lunch at a restaurant in the port, which surely must have had healthy fresh fish on the menu.

The power couple are staying on a yacht and arrived at the dock in a luxuriously appointed speed boat, which Jay Z helped his wife get in and out of the yacht.