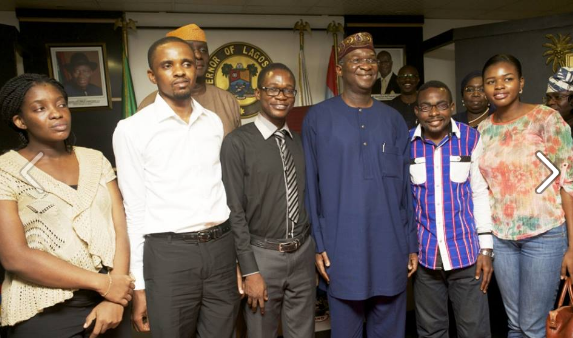 Three of the governor’s guests were health workers of First Consultant Hospital, they got infected after contacting Nigeria’s index case Patrick Sawyer, who “imported” the virus into the country from Liberia in the end of July.

Luckily, there is currently no active case of Ebola infection in Nigeria, however the epidemic continues ravaging the West African region. The number of deaths from this year’s outbreak has almost reached the terrifying figure of 2,500. The number of new infection cases expected to rise, in worst-case scenario, to 20,000 by the end of this year. Nigeria has managed to contain the virus spread, but due to the present situation the danger of new wave cannot be excluded. As for now, the brave survivors share their experience and describe what the fight against Ebola was like for them.

“We said we would risk our lives to protect Lagosians”

According to Vanguard, the first to speak at the meeting was Dr. Adaora Igonoh, who expressed joy and gratitude to God for saving her life. She thanked Fashola for his support.

“We are privileged to see this day and to be here with everybody, it is an honour. Thank you so much Governor Fashola, we can’t thank you for everything. We at First Consultants Medical Centre took a risk, we risked our lives because we knew that we wanted to ensure the safety of Lagosians, Nigerians and humanity because we are a global village; from a small village it can spread to the world and we knew the implications, but we said we would risk our lives and we would not let the index case leave the hospital.”

“I did not want to admit it was Ebola”

Dr Fadipe Akinniyi said how sincerely wanted to believe that her case was malaria but not Ebola, when she noticed the EVD-related symptoms.

“I am most happy here today because as matter of fact, when everyone was running helter-skelter, I told myself I only opened the door and by the virtue of that, nothing should happen to me. I never knew I was deceiving myself, until the day I recorded my temperature and there was a kind of spike. I told myself what is going on. Once I have treated malaria a while ago and I told myself that it could be malaria. I used anti malaria drugs but nothing changed, rather it was getting worse. Eventually, I went to a private hospital to treat myself because I did not want to admit it was Ebola. I felt they would be able to proffer solutions to all my problems but it wasn’t to be so. Rather, it was becoming terrible and I started stooling and vomiting. I summoned the courage and called the doctors at the monitoring units that my temperature has been persistently high.”

“She was two months pregnant, it was herfirst day on the job and first patient, Patrick Sawyer”

Dennis Akagha, husband of late nurse Justina, started with commending Fashola over his effort and measures taken by his administration to help those affected. He spoke about his spouse, who had contacted Sawyer, and how the tragedy came into their house.

“She got contact with the index case, when she came back home, she told me. We didn’t know what was happening because she was having symptoms. She was two months pregnant. She was feeling feverish. In fact that was her first day on the job, it was her first day and her first patient was Patrick Sawyer. She just resumed that day, I encouraged her to go to work, but she was reluctant because of her situation, but I had to convince her to go and tell them in the Hospital about her condition so that they can give her more time. That was just the first day. When she came back, the following day she went to work again, then the next two days, she was off. We were just at home when the case was announced the case of Sawyer and she told me that she cared for him at the hospital and I asked her if she was sure about what she said, because we have been hearing about it. I asked her what kind of contact she had with him and she said she used protective gloves. Hearing that, I felt rest assured.”

“Sawyer lied to me”

Dr. Ibeawuchi Morris was the one who received Sawyer when he was rushed with symptoms to the hospital. At that time Morris did not know it was the deadly tropical virus.

“When I got there, I was just talking to him. It was very unlike me. Being a doctor, you must examine your patient. After due examination, I asked him some questions. But Patrick Sawyer lied to me, even the ECOWAS Protocol Officer, who sat there, kept quiet.

“He asked him why he was in First Consultant. He lied to me that he was in a conference and felt so weak. As a result, people now rushed him to First Consultant not knowing that he collapsed at the airport. On that very day, the ECOWAS Protocol Officer was there and did not say anything. After sometime, I took his samples and sent it to the lab. I also informed Dr. Adadevoh (now of blessed memory). I informed her. She told me to get back to her as soon as the result is out. When the result came out, everything was normal. But that night, the liver function test was not available. I told Dr. Adadevoh about MP result, and she was so confused and shivering because the man came in with a temperature of 39.7.”

Then the narrator explained in detail the symptoms and the further development from the medical point of view adding that the patient’s state was rapidly worsening.

“That made us to be so concerned. After we went around, Dr. Adadevoh went for her daily clinic. It was at that point that one of the ECOWAS officers now came in and brought us information that Patrick Sawyer collapsed at the airport. After that, she asked whether I got the information. That was how the whole thing started. From there, we instituted barrier nursing technique. She tried as much as possible to get through to the Lagos State Ministry of Health. Again, I was asked to get Sawyer’s sample.”

The governor and those in attendance dedicated a minute silence for those who lost their fight against Ebola.

Fashola sympathized with the survivors over the trauma they experienced. Several times the state leader stressed the courage of theirs and thanked them for professionalism adding that their stories are crucially important lessons for the future.