Girl impregnated by own father in Oyo tells her story (Photos) 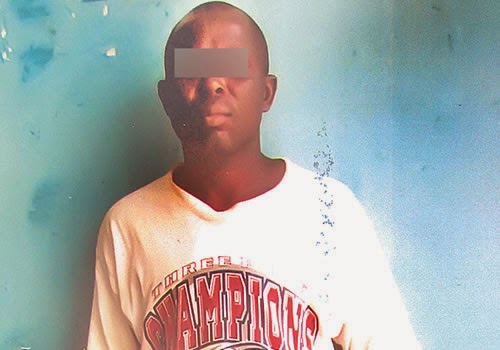 Girl impregnated by own father – It is unbelievable. It sounds strange, though this is not the first time such would be happening. Each time the incident occurs, it sounds untrue. But it has happened again and there is a living being serving as a confirmation. A bouncing baby boy named Moses Okiki Bolutiwatife. The ‘it’ is incest committed by a 42-year-old Segun Oderinde against his 16-year-old daughter (name withheld)

The name, Boluwatife, means ‘As God wills’, but is it really the will of God for a man to sire a child through his own biological daughter? Okiki also means ‘fame’ but is it this kind of fame the little baby would have wished himself? This is the strange thing that has happened in the Oderinde family in Gboro Compound, Igbeti, Olorunsogo Local Government area of Oyo State.

Crime Reports learnt that Oderinde and the mother of his daughter, one Funmilayo (37), divorced each other 13 years ago when the girl was just three years old. The young girl was in her mother’s custody until when September 2013 when Oderinde insisted on taking his daughter into custody. Not only that, he insisted that his daughter should be sleeping in the same room with him.

Things however took a turn, according to reports, when on December 25, 2013, the teenager’s sleep was rudely interrupted by her father who came home drunk at about 1 a.m. asked her to get up. The girl’s eyes widened with shock and fear when her father brashly told her to remove her dress.

As expected, the girl refused her father’s abnormal command but quickly complied when she saw him brandishing a well-sharpened, glittering cutlass, with a threat to sever her head in a jiffy if she was not fast in obeying his instruction. He succeeded in having sexual intercourse with her, albeit forcefully.

Unable to comprehend her father’s action, the girl reported the incident to one of her stepmothers, who promised to find out if her claim was true. Whether the woman asked her husband or not, the girl did not know.

Her ordeal however continued when the man had sex with her again in March and April 2014, unknown to her that she was already pregnant with the first encounter. When she started feeling weak by the end of April, she was said to have been taken to Ronke Clinic, Igbeti, by her stepmother who is a nurse and was confirmed to be pregnant by one Mrs Elizabeth Aremu.

The proprietress of the clinic reportedly informed the girl’s father and her paternal grandfather of the result of the pregnancy test carried out on the girl and her confession which indicted her father. Oderinde was said to have denied the allegation and started maltreating his daughter until the case was reported at the Igbeti Division of Oyo State Police Command on April 30, 2014.

When the report was received, The Divisional Police Officer, Mr Oyelere Ishola, was said to have taken the girl to General Hospital, Igbeti where the pregnancy was re-confirmed. She was referred to a diagnostic centre to ascertain the duration of the pregnancy, and the ultrasound scan done at one Bethsaida Hospital, Igbeti on May 1, 2014 indicated that the girl was four months and two weeks pregnant. She was given the second week of September 2014 as the expected delivery date.

Crime Reports further learnt that the DPO and the Divisional Crime Officer had to take it upon themselves to register the teenager for ante-natal care at the General Hospital and while investigation was ongoing, Oderinde, who had initially denied having carnal knowledge of his daughter, confessed to have committed the act but denied impregnating his daughter.

Based on the confession, Crime Reports gathered that on May 30, the incestuous man was arraigned in Magistrate Court, Kisi on charge number MKS/8C/2014 on a three-count charge including rape. He was thereafter remanded in prison custody.

The teenager was reported to have delivered a healthy baby boy on September 9, 2014 and on September 16, the baby was named Moses Okiki Boluwatife Oderinde. This means that Oderinde is the father and grandfather of his daughter’s baby!

Speaking with Crime Reports from her mother’s house where she had been staying since she was discharged from hospital, the teenage mother narrated her story thus:

“I was living with my mother until 2013 when my father asked me to come and live with him. On December 25, 2013, my father woke me up and asked to remove my clothes but I refused. He drew a cutlass and threatened to kill me if I did not do his bidding. Afraid, I removed my clothes and he forcefully had sex with me. He was the first man to sleep with me because I had never had sex before then.

“The following day, I reported to one of his two wives who was a nurse and she promised to ask him, but I don’t know whether she eventually did. In March, 2014, he did the same thing again and I ran to his second wife’s house and reported to her. She asked me to swear to an oath with a bible but I refused since I knew I was saying the truth. I started sleeping in her apartment.

“Unfortunately for me, on Saturday preceding Easter celebration, precisely on April 18, he had sex with me again. All the while, I did not know I was pregnant.  I had my last menstruation in December 2013.

“My stepmother suspected I was pregnant and took me to one Mrs Aremu who confirmed the pregnancy. The case was reported at the police station and I started living with my paternal grandfather until I fell into labour. My mother wanted the pregnancy to be aborted but the doctor said he could not do it.

“After I was delivered of the baby and my grandfather was told that the baby has a striking resemblance with my father, he ran away and has not been seen since then.

“Since the confirmation of the pregnancy, the DPO and the DCO were the ones who purchased baby things and other items that I would need during and after delivery. They also paid my hospital bill. I now stay with my mother and she is helping me to take care of the baby.”

The girl appealed to members of the public to come to her aid so that her education would not be stalled. “I want to return to school. I was in JSS2 when this happened but I don’t want it to mark the end of my academic pursuit,” the girl said.