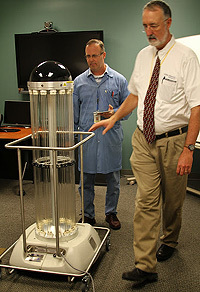 Ebola Detector – Following the upsurge in the outbreak of the Ebola Virus Disease, EVD, in West Africa, Japanese researchers say they have developed a new method to detect the presence of the deadly disease  in 30 minutes.

According to Professor Jiro Yasuda and his team at Nagasaki University, the ebola detector could allow doctors to quickly diagnose infection of the Ebola virus.

The team also stated that their process is also cheaper than the system currently in use in West Africa where the virus has already killed more than 1552 people, according to the World Health Organisation, WHO.

“The new method is simpler than the current one and can be used in countries where expensive testing equipment is not available,” Yasuda told AFP by telephone.

“We have yet to receive any questions or requests, but we are pleased to offer the system, which is ready to go,” he said.

Yasuda said the team had developed what he called a “primer”, which amplifies only those genes specific to the Ebola virus found in a blood sample or other bodily fluid.

Using existing techniques, ribonucleic acid (RNA) – biological molecules used in the coding of genes – is extracted from any viruses present in a blood sample.

This is then used to synthesise the viral DNA, which can be mixed with the primers and then heated to 60C to 65C.

If Ebola is present, DNA specific to the virus is amplified in 30 minutes because of the action of the primers. The by-products from the process cause the liquid to become cloudy, providing visual confirmation, Yasuda said.

It was gathered that a method called polymerase chain reaction, or PCR, is currently widely used to detect the Ebola virus, which requires doctors to heat and cool samples repeatedly and takes up to two hours.

“The new method only needs a small, battery-powered warmer and the entire system costs just tens of thousands of yen (hundreds of dollars), which developing countries should be able to afford,” he added.

No fewer than five countries in West Africa have confirmed cases of Ebola virus within their territories- Nigeria, Guinea, Sierra Leone, Liberia and Senegal.

In Nigeria alone, six people have died from the dreaded disease since a Liberian businessman, Patrick Sawyer, brought the disease to Lagos on 20 July, 2014.

With more cases of the Ebola virus disease being reported in the country and suspected patients having to wait for days to confirm their status, maybe the new technology would help to reduce the waiting period.

Ali Modu Sheriff Finally Speaks On His Association With Boko Haram – See what he said!

See the man with the longest manhood in the world (Photos)