Share on FacebookShare on Twitter
Sahara Reporters is reporting that Boko Haram militants attacked a platoon led by the son of former President Olusegun Obasanjo, shooting him today.. They say he sustained serious injuries to his legs and was being transported to the hospital at the time of their report. Find it below…

“Adeboye Obasanjo, an army engineer, was a Lieutenant Colonel at the 3rd Division in Jos, Plateau State.

He and his platoon were engaged with Boko Haram militants at Baza, which is the village of the General Officer Commanding (GOC) of the 3rd division when the incident took place.” 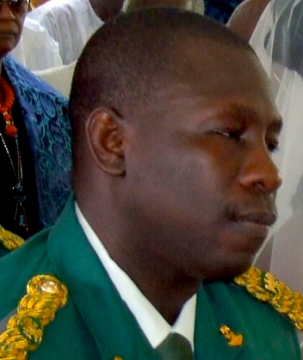 The Lieutenant Agwu of the 234 battalion, GOC of the 3rd Division, Major Gen JS Zaruwa and Colonel Victor Ebhaleme who serves as the Brigade Commander of the 23rd Army brigade in Yola were all together advancing towards Michika when Boko Haram fighters unleashed the deadly attack on the soldiers.”

24 soldiers in the platoon were reportedly killed by the militants.

Apart from the dead soldiers, the army also lost an armored tank to the militants. As a result of the attack, the army has moved sensitive weapons from mubi to the Brigade headquarters in Yola leaving mubi vulnerable to attack. The town of Mubi has practically been deserted following the closure of schools and massive retreat of soldiers from the city.

The former president is currently traveling in Singapore according to family sources.