Photos: See the woman who is half human and half fox! (You need to see this) 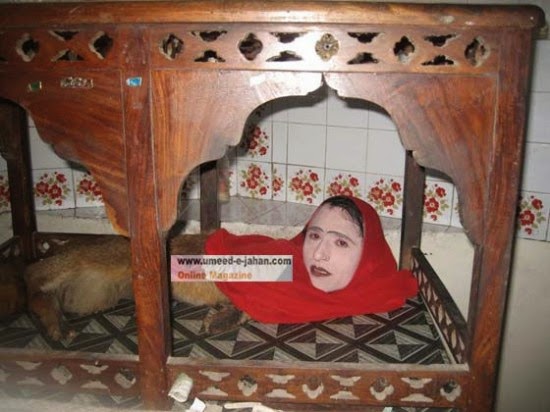 Share
One of the top attractions at Karachi Zoo in Pakistan is ‘Mumtaz Begum Africa Wali’ – a mythical half-fox, half-woman chimera. With the body of a fox and the head of a woman, this bizarre creature manages to delight visitors more than any other animal in the zoo. Her witty conversation and fortune-telling talents make her an instant hit with any sort of crowd.

Once you enter Karachi Zoo, it’s hard to miss Mumtaz Begum – the organizers announce their bizarre attraction on a megaphone. When you get inside Mumtaz Mahal, the building that houses her, all you can see at first is a fox’s hide placed on a table-like arrangement. Suddenly, a woman’s head appears out of nowhere, exactly where the fox’s head is supposed to be.

The woman wears heavy make up with bright lipstick, and small children in the crowd are immediately captivated by her presence. Then she begins her story: “I was born like this in Africa 35 years ago, and I live on cake, juice, and fruits…” After a short monologue, she engages with visitors and answers their questions in several languages.Of course, Mumtaz isn’t really a mythical creature – she’s just an optical illusion created by a man rearing his head through a wooden table next to the body of a stuffed fox. Over the years, the role of Mumtaz has been played by several men. A man is always chosen for the part, according to zoo director Mohammad Fahim Khan, because men are able to respond better to harassment and negative comments. The selection is made according to acting talent and also the number of local languages they can speak.

The current ‘actor’ playing Mumtaz Begum is 33-year-old Murad Ali, who inherited the role from his father 16 years ago. Ever since, the father-of-two has been putting on his make up and getting into character for up to 12 hours a day. It sure is a strange thing to be doing for a living, but Ali seems to be really enthusiastic about his job. “The people who visit here, go away happy. And knowing that they feel happy makes me happy too,” he said. “There is a bond of love between me and them. Life is very short; it should be spent spreading smiles.”

Mumtaz Begum is so well known locally that she has her own set of regular visitors. Students go to her routinely with questions about the results of their examinations, and concerned parents visit her to ask when their daughters will be married. People ask her all kinds of questions about their destiny, and are satisfied with her replies. Mohammad Osama, a sixth grade student, said: “I feel very good. I had a nice talk with her. I am really happy. I’m happy I came here.”

“Women and children are especially keenly interested in this character,” said Fahim Khan. “They come here; they watch her and talk to her. This is an art. He is like an actor who plays this role and entertains the people.” But not everyone likes this strange feature of the zoo; according to its founder, AA Quraishy, Mumtaz’s performance “is despicable and ignoble.” I guess it’s not for everyone.

OMG! You Need To See What Dbanj Said About Genevieve – She Will Hate Him For This (LOOK)