Share on FacebookShare on Twitter
The doctor performing a biopsy on Joan Rivers’ vocal cords stopped to take a selfie in the procedure room while the comedian was under anesthesia and just moments before she went into cardiac arrest, a shocking new report claims.More.. 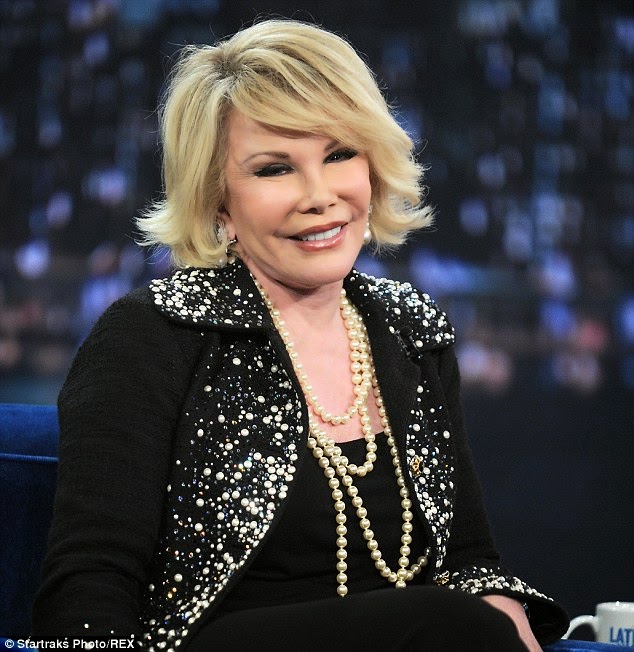 According to CNN, a member of staff at Manhattan’s Yorkville Endoscopy clinic told investigators about the physician’s questionable behavior. The physician hasn’t been publicly identified, but is believed to be Rivers’ personal ear-nose-throat doctor.

Joan Rivers, 81, had checked in for a routine throat procedure at the Yorkville Endoscopy clinic in
Manhattan on August 28, when her condition took a shocking turn for the worse. First the clinic’s medical director Dr. Lawrence Cohen carried out a scheduled endoscopy. The procedure was intended to help diagnose her hoarse voice and sore throat and it involved the insertion of a camera down her throat.

After Cohen had finished his work, a biopsy was allegedly done on Rivers without her prior consent.
Investigators believe that Rivers’ vocal chords began to swell during the allegedly unauthorized biopsy, cutting off the flow of oxygen to her lungs, which led to cardiac arrest on the morning of August 29. Rivers was then taken from the clinic to Mount Sinai Hospital a mile away, where she died a week later.

On Thursday Yorkville Endoscopy issued a statement denying that any vocal cord biopsy had been carried out at the clinic. The next day, Dr. Cohen resigned in the wake of the celebrity’s death.
Neither Cohen nor Rivers’ ear, nose and throat specialist have been accused of wrongdoing at this stage by investigators.

Details of how different emergency services responded to the star’s unexpected cardiac arrest, fighting to save her at a clinic in New York were also released last week. The official told CNN that the response began with a 911 call from the clinic, which was given the highest priority.

The fire department were first to arrive at the clinic, five minutes after the call. Medical staff were already trying to give Rivers CPR using a defibrillator and a breathing tube. The firefighters then took over the attempts to revive her.

Two minutes after the firefighters came, an ambulance arrived at the clinic, whose paramedics helped with the CPR. Almost immediately after that, another Fire Department vehicle arrived with medical aid, making a total of more than 10 people fighting to save her. Unfortunately, after several days on life support, Rivers died on September 4 prompting an outpouring of grief from the world.

15 Horrible celebrity interviews we can’t forget – #3 will leave you in stitches! (With Pictures)

The 15 worst celebrity plastic surgeries – #1 will leave you in stitches! (With Pictures)