A report published September 18, titled, “Welcome to hell fire: Torture and other ill-treatment in Nigeria” has detailed the how the police and the military in Nigeria routinely torture women, men, and children some as young as 12, using a wide range of methods such as beatings, shootings and rape, Sahara reports.

The report which was compiled from hundreds of testimonies and evidence gathered over a period of 10 years by renowned international human rights organisation, Amnesty International also details how civilians are detained and tortured as a means to extort money or force a confession to solve cases which are under investigation. 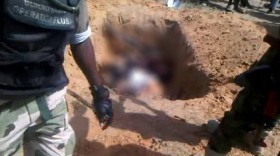 Some of the torture techniques include nail or tooth extractions, choking, electric shocks and sexual violence.”It was revealed how most people who are detained are denied access to the outside world, including lawyers, families and courts.

“Torture has become such an integral part of policing in Nigeria that many police stations have an informal ‘Officer in Charge of Torture’ or O/C Torture,” the report said.

Recounting her ordeal, a 24-year-old woman named Abosede said police abuse left her with a permanent injury.She said: “A policewoman took me to a small room, told me to remove everything I was wearing. She spread my legs wide and fired tear gas into my vagina.

“I was asked to confess that I was an armed robber…I was bleeding…up till now I still feel pain in my womb.”

Speaking about his experience, a 15-year-old boy from Yobe state identified as Mahmood, , who was arrested by soldiers with around 50 other people, mainly boys between 13 and 19 years old, said, he was detained for 3 weeks. In that 3-week period, the soldiers beat him repeatedly with their gun butts, batons and machetes, pouring melting plastic on his back, making him walk and roll over broken bottles, and forcing him to watch the extra-judicial execution of other detainees. He was eventually released in April 2013.

According to Amnesty International’s Research and Advocacy Director, Netsanet Belay, torture is not a criminal offence in Nigeria, though it is prohibited in the constitution but the country has yet to pass legislation outlawing the violation.

Baley spoke of 12-year-old boy who was arrested, beaten, forced to clean vomit with his bare hands and alcohol was even poured on him.

“Torture happens on this scale partly because no one, including in the chain of command, is being held accountable. Nigeria needs a radical change of approach, to suspend all officers against whom there are credible allegations of torture, to thoroughly investigate those allegations and to ensure that suspected torturers are brought to justice.

“When internal investigations within the police or the military do take place, the findings are not made public and the recommendations rarely implemented. Of the hundreds of cases researched by Amnesty International, not one victim of torture or other ill-treatment was compensated or received other reparation from the Nigerian government,” he said.

He therefore called on the Nigerian government to act fast by passing a law which makes torture a criminal offence.

About a month ago, Amnesty International had made public a gruesome footage that allegedly shows Nigerian soldiers slitting the throats of insurgents and dumping their bodies in a mass grave.

See who is going to replace Joan Rivers as fashion police..