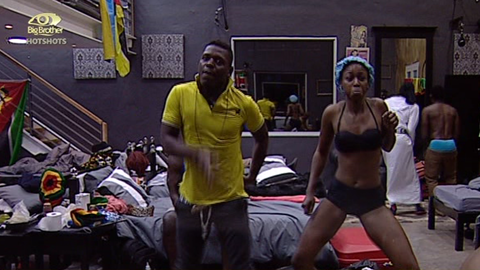 Share
It’s amazing what a little bit of competition will do! Up till now, the housemates have been taking it easy, but since they’ve been divided into two groups for the extravaganza – a split which has already caused tension – they have been hard at work to make sure they win the big prize on Saturday.

“She was never married to Anthony; the traditional marriage… Things came to a head between Lilian and JJ, as they argued over creative control. Professing twenty years of experience, JJ wanted to apply his expertise to the extravaganza; but Lilian felt he had to let go and hand over the reins to the others every once in a while.Samantha was not fazed by either of them, making sure her thoughts on the performance were heard.

Before long, the housemates had calmed down as they gathered in the bedroom and jived together. Lilian and Permithias had a good time bumping and grinding, before she was scooped into his arms and plunged to the ground in an elaborate dip. Their disagreement about Permithias’ prank was forgotten for the moment. Will it be wiped from Lilian’s memory for good after some energised bonding?

They weren’t the only ones getting into the groove, as Kacey Moore and Resa waltzed about the room in a tight embrace. Esther soon started; rocking her tiny hips from side to side and beckoning Arthur and JJ to join. Piled on the bed, Butterphly, Idris, Trezegah, Luis,Mira, Sipe and Macky2 were not to be swayed and, with shuffling papers and serious concentration, carried on preparing.

Huddled in another corner, Sheillah and Nhlanhla were doing a dance of their own, absorbed in serious conversation, faces close together, deepening the connection that has escaped no one’s attention. How long will we have to wait before their dance gets a little dirtier as well?
Watch Video below:: (Flash enabled mobiles)