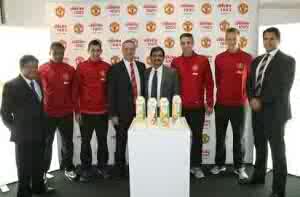 The deal will allow Chi to use the legendary Manchester United crest and club imagery on a range of products throughout Nigeria.

Reportedly, the deal is worth between 1-2 million pounds a year, as they continue to boost their income signing lucrative deals with the aid of their global appeal. Founded over 30 years ago, Chi’s brands include Chivita 100%, Chivita Active, Chi Exotic, Chi Happy Hour and Chi Ice Tea.

Manchester United’s group managing director Richard Arnold said: “We are delighted to welcome Chi Limited as an official partner of Manchester United. With over 30 years of experience, Chi has a commitment to the health and well-being of the local population by producing high quality, market leading products.”

According to him, Man U has close to 35m followers in Nigeria. “Who are some of the most passionate in our global fanbase, something that we fondly remember after playing in Abuja in 2008,” he added.

An event was held at the prestigious Old Trafford Stadium in Manchester UK and leading players of the club like Angel Di Maria, Robin Van Persie, Valencia and Anders Lindegaard attended the ceremony.

“We are confident that the partnership will further deepen consumer loyalty as well as ensure that millions of passionate soccer fans across Nigeria continue to refresh and rejuvenate themselves with Chivita100% Juice and Chi’s other beverage offerings, as they relish every moment of the beautiful game,” Chi’s head of marketing Probal Bhattacharya said.