Photos: Meet The World’s Most Beautiful First Ladies (Must See) 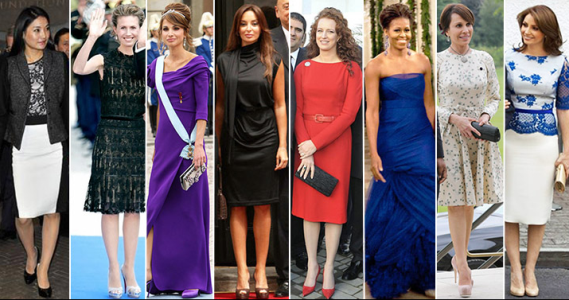 Although not stated deliberately, every first lady who has been recognized both locally and internationally are the ones who in every way have dignified themselves both in their official duties as wives of presidents and more importantly, in their looks.

Does this mean to say that looking good is also serious business for every first lady? According to Richestlifestyle, here are the list of world’s most beautiful first ladies…and amazingly, Michelle Obama came sixth on the list.

The stereotypical queen is a beautiful, elegant woman and Queen Rania of Jordan is no exception. Married to the King of Jordan, Abdullah II, Queen Rania has been recognized by Forbes twice as being among the 100 most influential people in the world.

In addition to the influence she holds over other, Queen Rania is both intelligent and beautiful; a hard combination to come by these days. There is no doubt that her intelligence is part of what makes her so influential in this world.

While her outlook on life is modern, she is rooted in traditional ways of living and cares deeply for other people. As a well -known philanthropist she has made strides in improving education for children in Jordan. She has also been a passionate crusader in the quest to empower the women of her region.

Before she became a queen she worked as a professional in the technology industry. Since she became the Queen of Jordan she has adopted an approach to her clothing choices that allows her to dress in modern styles and still remain dressed modestly. Even her hair is styled in a way that looks modern but is still appropriate for a queen.

As the first lady of Syria, Asma al-Assad is married to President Bashar Al-Assad and is truly a beautiful sight to behold. Not one to pile on the makeup, Asma al-Assad has a natural beauty.

The British-Syrian’s signature style involves her platform Louboutin shoes and her hair kept wavy. Though she is a gentle person she can also be firm when necessary, a quality that is very valuable in a lady as refined as herself.

This soft side of her personality is one of the reasons she is self-assured and possesses a classic level of beauty that not every woman can pull off. Her self-assuredness is part of what makes her such a powerful decision maker within her country.

Morocco’s current King, Mohammad the VI, is married to Princess Lalla Salma. The princess’s distinctive red hair contributes to her gorgeous looks. She is also an intellectual woman who has received an excellent education; holding a degree in engineering.

She made history for the distinct honor of being named royalty due to her marriage to Mohammad the VI. The first wife of a Moroccan ruler to have ever been given that title publicly.

Not only does she play an important part in the ruling of Morocco, she has also founded an association working to prevent cancer. As a fan of Modern Western style clothing she is also on the cutting edge of fashion with the Kaftans she wears, which are always colorful. She is known for wearing this particular style of clothing when she meets other world’s First Ladies.

At 50 years old Mehriban Aliyeva, Azerbaijan’s First Lady, still looks as fabulous as she ever has. Married to Azerbaijan President Ilham Aliyeva, she has three children and two grandchildren.

When it comes to her fashion sense she is right up there with Michelle Obama, Jacqueline Kennedy and Mozah bint Nasser Al Missned. She is widely admired, not only for her beauty but also for her accomplishments and even her wit.

After marrying President Aliyeva she went on to complete a degree at the Sechenov Moscow Medical Academy. Ranked as one of the world’s most fashionable First Ladies, she is a Goodwill Ambassador for UNESCO as well as a licensed doctor. She also served as the President of the Azerbaijan Gymnastics Federation. Her classic style includes Chanel purses, tailored outfits and high heeled shoes. She is also fond of the classic beehive hair style.

In 2011 Queen Jetsun Pema of Bhutan got her title when she married King Jigme Khesar Namgyel Wangchuck, an Oxford-educated. A commoner, Queen Pema is a daughter of pilot and is known by her preference for Bhutanese dresses in a traditional style.

As a well- rounded woman she enjoys hobbies such as basketball and fine arts, and is especially interested in painting. Her love for basketball led to her acting as her high school basketball team’s captain.

Since graduating, her interest in basketball has never wavered. She is fluent in three languages; English, Hindi and Dzongkha, which is Bhutan’s national language.

U.S. President Barack Obama’s wife Michelle is also among the world’s most beautiful first ladies. She has been making headlines for her beauty since her husband became the Commander – In – Chief of the United States.

Her beauty combined with her strong yet caring personality explains her self-assuredness. Mrs. Obama has also been recognized as one of the world’s 100 most beautiful people. Popular opinion is that of all the first ladies of the U.S. Mrs. Obama comes in second only to Jacqueline Kennedy when it comes to beauty.

Michelle Obama is known for fashions such as the sleeveless gowns that show off her smooth and toned arms. She has also received a lot of attention for the silk coat by Thom Browne that she wore to mark the second inauguration of President Obama. As someone who frequently appears in public wearing clothes designed in the U.S, Michelle Obama has made quite a splash on the world that other first ladies haven’t.

Unlike the majority of first ladies, Michelle Obama often chooses clothes that the average American can afford. This is one of the reasons so many people like her more than any other first lady in the past. The average woman in America admires Michelle Obama’s style.

As Gabon’s First Lady, Sylvia Bongo Ondimba is considered to be the most beautiful First Lady in all of Africa. Previously this title was held given to Chantal Biya. In addition to being known for her beauty, Ondimba belongs to the haute couture club and is a big fan of fashion designer Valentino.

She is also known for her love of Chanel couture. She is often seen in perfectly tailored frocks. As a children and women’s advocate she is very vocal about her passions.

Mexico’s current First Lady, Angelica Rivera was previously a star on the Spanish network Telenovela. By the time she took up residence in Mexico’s White House she was prepared to be in the public eye as the wife of President Enrique Pena Nieto.

Two years after their 2010 wedding he was elected as Mexico’s President. Now that she has become a political figure Angelica Rivera traded her curly hair style in for a more sophisticated style. Her wardrobe went from revealing to chic, featuring sheath dresses and modest suits. Even her wedding gown was a modest style; it included a full train and a high collar.