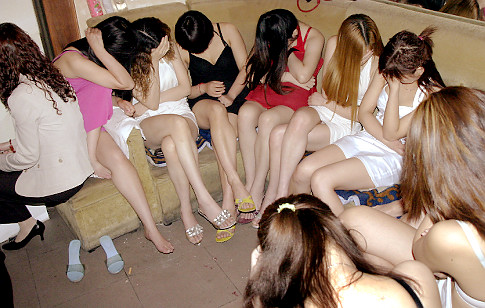 Teenage Chinese girls have become the latest import from China to be huge hits in Nigeria. Ironically, while Chinese products are the cheapest in Nigerian markets, the Chinese hookers provide services to the rich and famous.

A Saturday Sun investigation has revealed that a Chinese couple is running the sex ring from a twin duplex building and another two flats service apartments Lagos State. At least 40 Chinese girls are camped in the two apartments, where top government functionaries, business executives and expatriates pick them for a fee not less than $1, 000 for a round of sex or $2, 500 for long hours, such as overnight sex romps.

Weeks of monitoring and investigation of the syndicate also revealed that about 15 of the girls camped in the flats are usually moved from that location at about 6pm daily to join the others camped in the twin duplex on the same street, from where big clients will either come or send their drivers to pick them. Two chauffeur-driven vehicles dedicated to this task include a cream Toyota Sienna bus and a black Nissan Infiniti SUV, both registered in Lagos.

A source within the syndicate told Saturday Sun that the teenage girls are recruited by the Chinese couple through their partners in China, with the promise of factory jobs in Chinese firms in Nigeria and all expenses paid holidays. Thereafter, fake documents are prepared for the girls and with the connivance of embassy officials, short-term visas are granted them.

The source: “Some of the girls were brought in through Ethiopia. I can’t explain how, but I know Master travel there often. More often, most of the girls usually sourced from poor homes are only made to face the reality after some days in Nigeria when they would have seen how the other girls they meet on ground count dollars every morning when they come back from ‘night duty.’

The sight of dollars and other free gifts they are exposed to have a way of forcing them to fall in line quickly. “Sometimes, you have some of the girls that may want to prove stubborn, the ‘Master’ (as the sex cartel kingpin is referred to by his Nigerian domestic aides while the girls call him “Boss”) will start by forcing such to drink hot drinks, like Hennessy or Champagne and smoke cigarette. Some will vomit all through the night after being forced to take more than their strength can take. “The Master can thereafter decide to initiate such stubborn girls by sleeping with them himself and in the process will beat them seriously in the night to make them succumb.”

“The girls are entitled to half of what they get from the men while our Master takes the remaining half, as return on his investments on them. The girls cannot afford to play smart because they don’t understand English language, which is the language of many of the customers. He and his wife are also in control of their international passports and telephones. They help the girls to reply text messages sent to them in English by customers because the girls don’t understand English, while the customers think they are chatting with the girls sometimes it is the Master and his wife that they are actually chatting with,” the source disclosed.

To cover their tracks, the couple behind the sex ringl had to seal the windows in the apartments where the girls are camped with acoustic materials, so that no voice can be heard from neighbouring premises, while the vehicles used to move the girls are also tinted, to shield them from being noticed.

A senior immigration officer who spoke on the condition of anonymity, said that the service is poised to rid Nigeria of any immigrant who fails to abide by the country’s laws.

“We have repatriated a lot of them. The security situation in the country is in a precarious state and the Nigerian immigration would do all it takes to reduce to its barest minimum the number of illegal immigrants and those who fraudulently find their way into Nigeria. We will also welcome any information that can help us to achieve this aim,” he added. 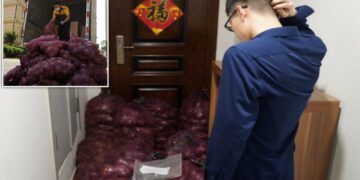