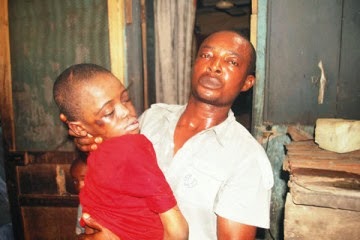 Shock and disbelief could best describe the expression on the faces of residents of Omitola street in Agege area of Lagos, when Saturday Vanguard visited Thursday , to ascertain the circumstance that led to the death of a 12-year-old boy.

The guardians of the boy allegedly beat him to death just as a man in Oregun, Ikeja, was also alleged to have beaten the son to death for stealing N1,000.

The 12-year old boy who was identified as Onyedikachi Mbanozo, was reportedly brought from the village by Mr and Mrs Paul Obiefule, last year, with a promise to send him to school. The couple reportedly kept to their promise by enrolling him in Holy Trinity Primary School, Agege,where he started from primary one.Information gathered from residents revealed that Mbanozo was allegedly often beaten at the slightest provocation by his guardians. He was said to have told some residents that he would leave for the village when he finished his primary school education. He never lived to see his dream come true. Life was snuffed out of him Tuesday,after one of the routine batterings. Ironically , he died on a day children all over the world were being celebrated.

He was hungry and sought to eat at about 1pm. It was to be his first meal of the day. His guardians allegedly pounced on him in the process of which he slumped and died.

Residents told Saturday Vanguard during the visit that when the couple discovered that Mbanozo was dead, they hid his corpse under the bed. Sensing danger that all was not well , curious neighbours were said to have asked after Mbanozo.

A resident who spoke on condition of anonymity told Saturday Vanguard that: “At first , the woman told us that the boy fainted and was rushed to the hospital. Later she said he had been discharged and was inside. When we insisted on seeing him , they said he was sleeping. Some people suspected all was not well with the boy when the the couple still insisted that the boy was still sleeping the following day. It was when we insisted on seeing the boy that she opened up, disclosing that Mbanozo was dead and that her husband had gone to get a car that would take the corpse to the village. While we were waiting for her husband to return, he called his wife on the phone and told her to pack her things out of their apartment and leave with their three children. We stopped her from packing and followed her to a beer parlour where her husband was waiting for her and contacted the police.

Confirming the arrest, spokes person for the Lagos State Police Public Relations Officer, Ngozi Braide said:“ At about 2.30pm on Tuesday, the Divisional Police Officer in-charge of Pen- Cinema Division , while on patrol with his policemen, received an anonymous  call that a man by name Paul Obiefule ‘m’ of No.22, Omitola Street, Agege Lagos and his wife had beaten a boy living with them named Onyedikachi Mbanozo ‘m’ aged 12years to death. On receipt of the information police patrol vehicles moved to the scene and brought the suspects and the deceased to the station for a detailed investigation. Case is currently under investigation at Pen Cinema Division’

Terrible!! Man Stabs His Cousin To Death For Stopping Him From Beating His Wife [Look]