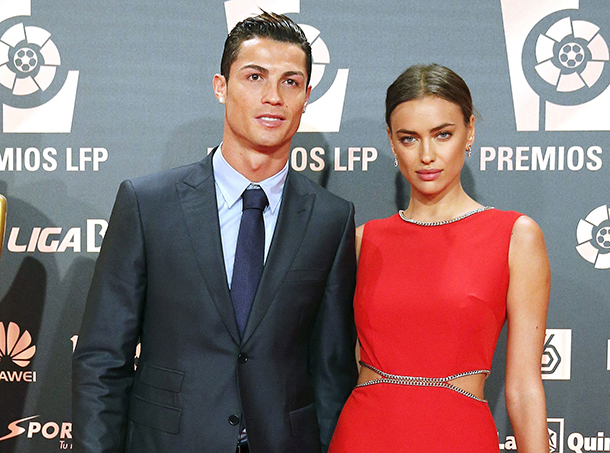 Cristiano Ronaldo’s five-year romance with model Irina Shayk ended because she allegedly refused to go to his mother’s surprise 60th birthday bash. Reports earlier this week suggested the Real Madrid star had split up with the Russian beauty after she unfollowed him on Twitter and failed to turn up to watch the Portuguese star win his third Ballon d’Or award in Zurich on Monday.

Kanye West spotted for the first time in months amid rumours…

With rumours swirling, Portuguese newspaper Correio da Manha has claimed that Shayk’s refusal to attend the 60th birthday party of Ronaldo’s mother Maria Dolores dos Santos Aveiro in his native Madeira is the real reason why the couple broke up.

A source told the publication: ‘Cristiano wanted to surprise his mum and as he spent Christmas with Irina in Dubai, he had planned to be with his mum on her birthday, but Irina didn’t want to go.

‘They had such a big row that he ended up spending New Years Eve alone with his son.

‘Irina mouthed off about Dolores and Ronaldo took sides with him mum. It was the straw that broke the camel’s back because they had hadn’t been getting on well in the last few months.’

‘She wanted someone who would, in the future, assume the role of mum for Cristiano Jr. That wasn’t a priority for Irina.’

Despite the couple’s break-up being cited as the reason for Shayk’s no-show at the Ballon d’Or ceremony, her representative insisted her inability to attend the gala in Zurich was because of ‘work commitments.’