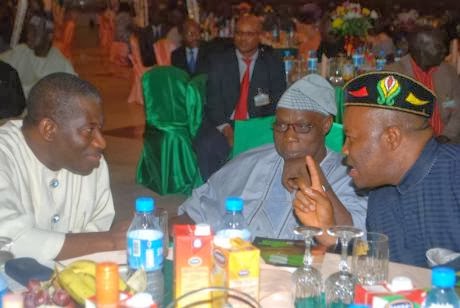 It had been previously reported that what was supposed to be a peace meeting ended in fiasco. Some sources said that Obasanjo was not feeling comfortable during the encounter because of the President’s recent provocative utterances against prominent Nigerian statesmen, including him. The others however added that the meeting “was frank and straight to the issues at hand”.

Still, it soon emerged that following the occasion OBJ declared his current mindset to be ABJ , or “Anything But Jonathan”. It was a clear indication that the whole thing did not go well.

The latest update on the meeting was exclusive provided by Leadership, according to which the ex-President put the acting President on the hot seat in his Hilltop residence in Abeokuta.

Together with Pastor Enoch Adeboye and Bishop David Oyedepo, also present at the meeting, Obasanjo asked Jonathan questions which he had earlier thrown up in his correspondence to the country leader.

See the FIVE questions of crucial importance which were allegedly heard behind the closed doors. It seemed like a court interrogation as Obasanjo asked Jonathan to “tell the truth, the whole truth, and nothing but the truth”.

1. Did you agree to run for only one term or not?

2. What did you tell me was your reason for not going after Boko Haram insurgents even when I told you this will boomerang?

3. What happened to Nigeria’s external reserve and Sovereign Wealth Fund?

4. Did you give licence to Niger Delta militants (Dokubo and Tompolo) to import arms in the name of their privately owned companies? If so, for what reason?

5. Did you not get correspondence from the United States consulate that a certain citizen named Buruji Kashamu is indicted for drug trafficking? Why did you appoint the same Kashamu as South West leader of PDP rather than hand him over to the US? And did the PDP give automatic Senate ticket to a wanted and convicted drug baron?

The information about the answers to these questions is however yet to be obtained.

Meanwhile, as less than a months is left before the presidential elections in Nigeria, the Peoples Democratic Party (PDP), the All Progressives Congress (APC) and other political parties signed a document to avoid actions that could endorse violence during and after the polls.

Fashola insults Buhari in Lagos rally – See what he said!