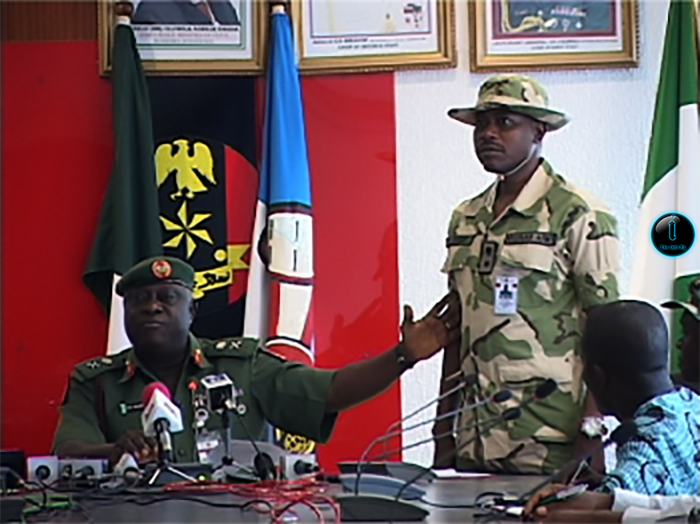 Share
The Nigerian Army says it does not have in its possession the original or copies of the credentials of the presidential candidate of the APC, Maj. Gen. Muhammadu Buhari. The position of the army was made known at a press conference in Abuja today Jan. 20th. The Director, Army Public Relations, Brig, Gen O. Laleye addressed news men. What he said below… 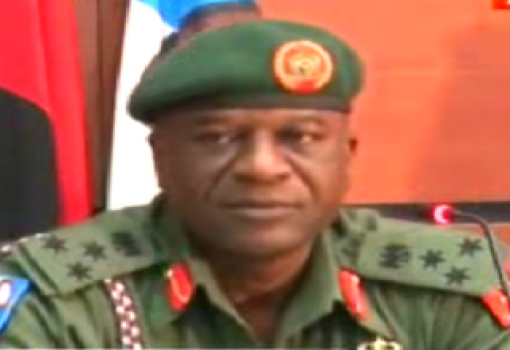 Gentlemen of the Press, I am pleased to welcome everyone back from the Christmas and the 2015 New Year festivities. On behalf of the Chief of Army Staff, officers and soldiers of the Nigerian Army, I wish you all a happy and more fulfilling 2015. Since our last media briefing on 31 December, 2014, some issues relating to the Nigerian Army have occurred and this briefing is holding specifically to address them.

I will begin with the Major General Muhammadu Buhari certificate controversy.

Gentlemen, let me state clearly that the Nigerian Army holds the retired senior officer in very high esteem and respect and would not be a party to any controversy surrounding his eligibility for any political office. Suffice to state that Major General Buhari rose steadily to the enviable rank of Major General before becoming the Head of State of our dear country in December 1983.

The media hype on retired Major General Muhammadu Buhari’s credentials as well as the numerous requests made by individuals and corporate bodies to the Nigerian Army on this issue have necessitated that we provide the facts as contained in the retired senior officer’s service record.

Records available indicate that Major General M Buhari applied to join the military as a Form Six student of the Provincial Secondary School, Katsina on 18 Oct 61. His application was duly endorsed by the Principal of the school, who also wrote a report on him and recommended him to be suitable for military commission. It is a practice in the NA that before candidates are shortlisted for commissioning into the officers’ cadre of the Service, the Selection Board verifies the original copies of credentials that are presented.

However, there is no available record to show that this process was followed in the 1960s.

Nevertheless, the entry made on the NA Form 199A at the point of documentation after commission as an officer indicated that the former Head of State obtained the West African School Certificate (WASC) in 1961 with credits in relevant subjects: English Language, Geography, History, Health Science, Hausa and a pass in English Literature. Neither the original copy, Certified True Copy (CTC) nor statement of result of Major General M Buhari’s WASC result is in his personal file.

I hope this explanation will put to rest the raging controversy surrounding the secondary school credentials of Major General Mohammed Buhari as it affects the Nigerian Army.

I will also seize this opportunity to make some observations on the recent CNN report titled ‘The Battle Against Boko Haram’, which was aired a few days ago. I believe we all hold the CNN in high esteem. However, CNN’s report on issues concerning kitting, equipment, medical treatment and corruption in the Nigerian Army is perhaps the best example of a media house’s show of bias, ignorance, poor journalism, unprofessionalism and handiwork of a sponsored documentary. Let me start with kitting. It would interest you to know that there is no Army in the world where personnel do not purchase additional uniforms and kits to augment those officially issued to them. Accordingly, the Nigerian Army without fail issues uniforms and kits to its personnel periodically.

Like other armies, the NA has over the years, established ordnance shops in all its barracks and cantonments where uniforms and kits are sold at subsidized prices to its personnel from allowances already provided in their pay slips. Similarly, you will agree with me that the NA has a very functional health care delivery system in the country. There is no barrack or cantonment that does not have at least one Medical Inspection Room, Medical Reception Station or Medical Hospital.

The NA fully subscribes to the National Health Insurance Scheme (NHIS) and this is functional in all its health facilities. Specifically, personnel in the North East have the best medical treatment in that the various health facilities in all the barracks and cantonments are well equipped. Notwithstanding this, personnel with extensive injuries are evacuated to the 44 Nigerian Army Reference Hospital Kaduna (44 NARHK), while others are promptly flown abroad for medical treatment. Therefore, issue of a soldier of the NA paying for treatment and drugs covered by the NHIS is absurd. The Nigerian Army’s undoubted operational gains in the North East of recent, have rubbished the claim of Boko Haram out-gunning the NA.

The CNN would do well to beam its searchlight on the atrocities of Boko Haram terrorists against innocent and defenseless Nigerians rather than the NA. Equally, the NA in the past had requested severally that any evidence of corruption in the NA should be reported to the appropriate authority. Till date, no such evidence has been forwarded but rather all we see and hear are sweeping statement of the purported corruption in the NA. In the case of Nick Robertson, his leading questions and introduction of the word ‘corruption’ to the unknown person purported to be a soldier of the NA was most unprofessional and merely justifies a paid exercise. The CNN in the past have interviewed authorised personnel of other countries’ armies and not unauthorized hooded criminals to speak to the media.

The CNN knows very well how to contact the relevant offices to clarify issues concerning the NA but chooses rather to conduct a clandestine interview in a kiosk with a faceless person and a masked individual who obviously know nothing about the NA.

Finally, the Nigerian Army wishes to state that it will remain focused on its mission to rid Nigeria of terrorism and insurgency. To that end, it has commenced the implementation of the extensive operational, administrative and logistical decisions reached during 2014 COAS Annual Conference. In no distant future, law abiding Nigerians will begin to see very positive results in terms of security, particularly in the North East and our dear nation generally. Before I depart, I once again seize this opportunity to reiterate the NA’s unalloyed loyalty and subordination to civil authority as presided over by His Excellency, President and Commander – in – Chief of the Armed Forces of the Federal Republic of Nigeria, Dr Goodluck Ebele Jonathan GCFR.

The Nigerian Army also wishes to emphasize its adherence to the principles and respect of human rights in the discharge of its constitutional duties. It further calls on everyone to remain vigilant and report any suspected breach of the peace to security agencies.
Thank you and God Bless.