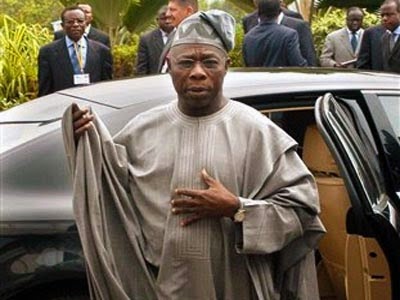 former President, Olusegun Obasanjo, on Tuesday said he adjusted his itinerary to suit and honour the presidential candidate of the All Progressives Congress, APC, Muhammadu Buhari, who was in Ogun State for his campaign ahead of the February poll.

Mr. Obasanjo made this known when Mr. Buhari led chieftains of the party on a courtesy call to him at his private residence in Abeokuta, the Ogun State capital.

“But let me in a special way welcome Muhammadu,” Mr. Buhari said. “Our paths have crossed on a number of occasions and when I was told you are going to be coming to Ogun State, I wasn’t sure whether you will come here or not. But I told my boys -I said well, whatever programme we have outside Ogun State for today, let us shelve it just in case Muhammadu and his party and his team decide to call here.

The former president said what was paramount to him was who would make Nigeria better irrespective of the party the candidate belongs to.

Mr. Obasanjo, however, declared that he remained a member of the Peoples Democratic Party, PDP.

Mr. Obasanjo added that politicians should do away with trivialities and face issues, to tell Nigeria what would be done to better their lots.

“I thought that I should say it today. I will just beg all of you who are contesting to add one to it; you mentioned economy, you mentioned corruption, and you mentioned security. All of you, I will beg of you, to add infrastructure. It’s very important. You may take it as part of economy but I will take infrastructure as special and give it special attention.

Photos: See the Ghanaian lady with the biggest natural hips ever