Just In: How Obasanjo abandoned Jonathan and Buhari today! 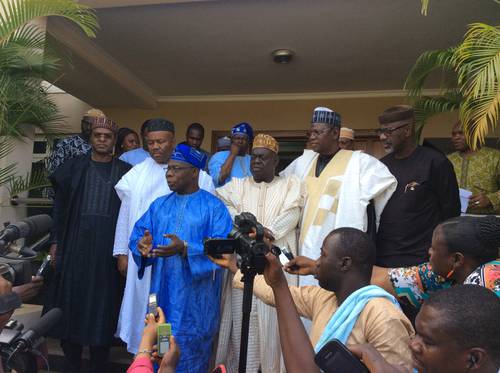 The scheduled February 5 Council of State meeting at the presidential villa is currently ongoing but the news just reaching reveals that one of the nation’s former leaders, General Olusegun Obasanjo is surprisingly absent.

“Aisha is pregnant? Bubu is a hard worker”…

The meeting of the Council of State, held to decide the fate of the forthcoming 2015 general elections, started at about 11:30am in General Obasanjo’s absence.

Th chairman of the Independent National Electoral Commission, Prof Attahiru Jega, and all service chiefs are waiting to brief the meeting.

Former President Olusegun Obasanjo is the only living Nigerian leader absent from the meeting, which is presided over by President Goodluck Jonathan. Many people are questioning his absence.

It will be recalled that General Olusegun Obasanjo, while inaugurating a overpass bridge in Kano city, said he would no longer talk about the February 14 polls until after the elections.