OMG! See what vice president Sambo did in Kaduna – This is wrong! 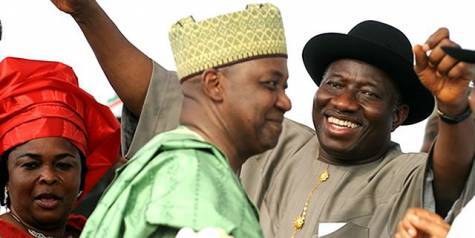 The running mate of President Goodluck Jonathan in the March 28 presidential election, Vice President Namadi Sambo, has reportedly done the unbelievable at the weekend in Kaduna State. Sahara Reporters on Tuesday disclosed that a credible source in the presidency told them that the Vice President at the weekend personally supervised the sharing of millions of Naira to individuals and groups in the state ahead of the election.

It was gathered that the gesture was aimed at making sure that the presidential candidate of the All Progressives Congress (APC), General Muhammadu Buhari loses to President Jonathan in the forthcoming poll.

Meanwhile, Kaduna State is believed to be one of the strongholds of the former head of state, as well as Kano and the rest of the North-west states comprising Sokoto, Zamfara, Kebbi, Jigawa and Katsina.

According to the presidential source, Sambo in one of the meetings held with PDP candidates promised that the party must do all it can to make sure the incumbent President Jonathan emerge victorious in the state which has traditionally been Buhari’s base since the 2003 presidential election.

The source further hinted that Sambo was of the opinion that it was critical for the PDP to use all the means at its disposal to win the forthcoming election.

He revealed the beneficiaries of the money to include traditional rulers, religious clerics and prominent youth leaders, adding that the largesse was being delivered to them with the condition that they must ensure Jonathan is elected.

It was learnt that the vice president had also distributed exotic cars to some senior citizens of the state with the aim of achieving victory in the poll.

It would be recalled that in 2011 general elections, the vice president lost the state to Buhari’s defunct Congress for Progressive Congress (CPC). All the polls conducted in his immediate polling unit as well as his Kaduna North local government area.

Meanwhile, the PDP has stated that it will not be dragged into the ongoing controversy regarding the visit of the presidential candidate of the All Progressives Congress (APC) Gen. Muhammadu Buhari, to the United Kingdom.

OMG! See what was found in Lagos cinema after 50 shades of grey movie – Need to see this!