Lagos woman bites off friends lip – A woman named Ada Joy had part of her lower lip bitten off by her friend, Chioma Ejiofor, 32, at Canal Extension, off Itanola Drive, Ajao Estate area of Lagos State over scuffle for an alleged gossip.

Girl fights white lover after he slept with she and her…

It was reported that Ejiofor accused Joy of spreading gossip with her name in the neighbourhood which angered her and made her to take the unruly action. 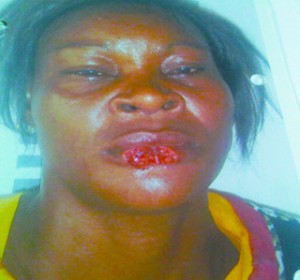 Police officers arrested Ejiofor, an indigene of Umuahia in Abia state and charged her before Isolo Magistrates’ Court.

The mother of four accused her friend of gossiping about her which incidentally led to an argument which further escalated to a fight.

During the fight, Ejiofor allegedly grabbed the victim and bit off part of her lower lip which fell on the ground.

The victim started bleeding profusely and was rushed to a hospital, while the suspect was arrested and taken to the Police Station at Ajao Division and later charged to court with wounding under the Criminal Code.

Ejifor pleaded not guilty to the charges against her and the presiding Magistrate, Mrs Y. R. Pinheiro granted her bail in the sum of N20,000 with one surety in like sum..

The prosecutor, Inspector A. Abasss did not object to her bail but asked the court to take judicial notice of the seriousness of the injury sustained by Ada.

The defendant was remanded in prison custody pending when she would meet the condiion of her bail.

The matter was till further notice for next hearing.

Ladies, 5 Sure ways to get back to normal life after having a baby

Friday’s Solar Eclipse might be the end of the World – See Why!

A friend found this in her boyfriend’s house, Ladies please see this and be…

My friend snatched my abroad-based boyfriend, now they are getting married