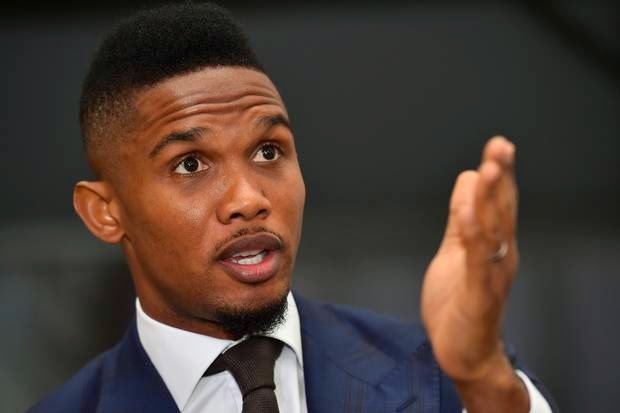 UK jewellers refused to sell watch to Samuel Eto’o – Oh no! Nigerians, why? Why? Former African Footballer of the Year Samuel Eto’o claimed today March 12ththat he tried to buy an expensive watch in a west London Jewellers but was refused by the sales rep because some Nigerians had come into the store the other day with fake credit cards. Eto’o, who is worth over $100million, said he’d gone into the store with his brother to buy a £10,000 watch, but said the shop assistant looked at them suspiciously and reluctantly allowed them to view the watches. Continue, it gets more interesting!
“I went to go buy a watch at a jewellers, not too far from my house. The watch I wanted to see was expensive. I asked the saleswoman – who was also black – ‘Could you show me that watch please?’ First, I saw her turn to her co-workers like, ‘Uh, what should I do?’ Eventually, she let me see the watch. I looked at it and said, ‘OK, I’ll buy it.’ I took out my credit card and when she went to go run it through the machine, she came back and said it was declined.”

Eto’o, who is the 7th-richest footballer currently playing, said he asked her:

“Was it declined or did you not want it to be accepted?”

“My brother asked, ‘What’s going on?’ And she said, ‘Nothing, nothing.’ But he said, ‘No, because when I came in, I saw how all of you were looking at us … My brother can afford this and the way you’re treating him shows that you think just because he’s black, he can’t afford this watch.’

“The woman then slipped up and said, ‘No, it’s just that we had some Nigerians in the store the other day who came in with fake credit cards. I don’t know if you can imagine the weight of what she said. If one of my own makes a mistake, they judge us all. I don’t think she’s a racist person, but she stereotyped all black people as ‘those people’.”

This major throwback pic of Paul Okoye of Psquare & wife will leave you in stitches – Money is good! (See Photos)

Guys, 6 important things you should always do after sex