READ Prophet TB Joshua’s prophecy to President Jonathan before the General Elections – This will definitely leave you in a big shock! 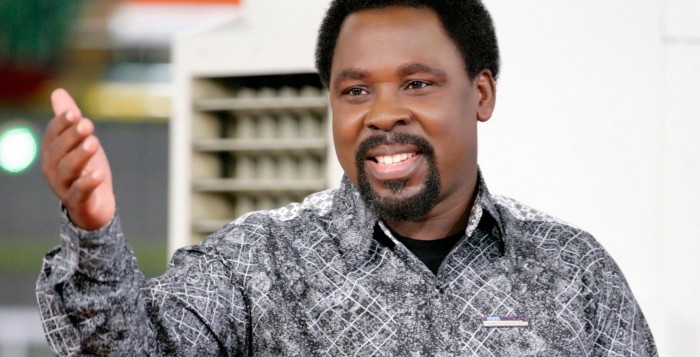 Prophet TB Joshua’s prophecy to President Jonathan – On Sunday 5th April 2015, Pastor T.B. Joshua sensationally revealed how he sent a message to outgoing Nigerian President Goodluck Jonathan several weeks before the historic presidential elections that pushed him out of power. “I want to use this moment to congratulate Nigerians in our midst here,” Joshua began in a message to his multi-national congregation, televised live via Christian network Emmanuel TV.

Alluding to his prediction a week to the election that the dark cloud he saw covering Nigeria was lifting, he emphasised that a bloody ‘war’ would have ensued if not for the prompt concession of power by President Jonathan.

“Look, Nigeria wanted change – everyone was yearning for change. An attempt to stop change leads to war, to a bloodbath… If Nigeria knows what we have overcome, we would dance.”

Joshua praised Jonathan’s tenure in office, insisting that he had served his nation well despite the immense security challenges.

The cleric, who is well-known for his alleged prophetic abilities, then revealed that ‘God’ spoke to him with a message for Jonathan several weeks before the general elections.

“This message should be delivered to your president, that whatever the outcome of this election, his regime has come to an end. He should accept to save the lives of millions,” he told the congregation.

Joshua claimed he called Jonathan by phone, adding that he had previously shared with him many revelations about Nigeria which eventually came to pass. “He knows Prophet T.B Joshua by the grace of God in him; he has my track record with him.”

Insisting the seriousness of the revelation was such that it had to be relayed personally, Jonathan promptly sent a close aide to meet the cleric. “It’s not a message I could say in the church because it would affect your vote,” Joshua added.

After the presidential aide had worshipped at The SCOAN during a Sunday service, Joshua said he met him and relayed the revelation that Jonathan’s regime had come to an end. “Soft landing – that is the language I sent to the president,” he told attendees.

Joshua described Jonathan as a man who ‘has a heart for God’, revealing that he even spoke with the Nigerian president shortly before his historic concession call to General Buhari.

“I said to him, ‘Your Excellency – all you need to say is thank You, Jesus, even when it seems there is nothing to be thankful for. He said, ‘Thank you, man of God’. Before I knew it, I saw the news on CNN that he had congratulated his opponent.”

Joshua described Jonathan’s exit as ‘wonderful’, cementing his legacy as a democratic champion. “A man after God’s heart is a man with a wonderful exit. The beginner is not the owner but the finisher,” he told congregants.

He prayed that people from the ‘South-South’ region in Nigeria where President Jonathan hails from would understand that ‘their son has become a hero’, adding that his actions prove the region is after a united Nigeria.

Taking a walk down memory lane, Joshua reminded congregants that he had given a similar message in 2010 to Laurent Gbagbo, the former President of Ivory Coast.

“In a vision, I saw crisis – thousands of people being killed in Ivory Coast – just because of the outcome of the election,” he explained to congregants.

After sending the message across to the then Ivorian leader, a delegation of government figures and presidential aides was dispatched to Nigeria.

“I told them that whatever the outcome of the election – whether the popular or unpopular voice of people – our President should concede. His regime has come to an end,” Joshua reminisced.

According to the cleric, Gbagbo had personally called him regarding the prediction, looking for an avenue to avert it and inviting him to Ivory Coast. Joshua insisted that nothing more could be done.

When Gbagbo refused to concede power to Alassane Ouattara in the controversial 2010 elections, a bloody onslaught ensued leading to the deaths of thousands and his eventual incarceration and public disgrace.

Joshua also reminded the faithful how he had personally warned Chief MKO Abiola that God was not backing his presidency in the ill-fated Nigerian elections of 1993 despite overwhelming public support in his favour.

He further recalled how, as a young man, he met the former Governor of Lagos State Lateef Jakande and told him that his beloved daughter was close to the grave. Both revelations came to pass.

The cleric added that his prophetic ministry is the reason he does not take sides in politics. “That is why I don’t belong to any party. All the parties are my own. I love everyone. If I belong to this party and the message of God is now against that party, how will I present it – when no one knows the mind of God? It is better I am free to deliver God’s message.”

He emphasised that material gain was not his mission, explaining that no exchange of money can be involved when it comes to spiritual matters such as prophecy.

“I am a material to be used that will not cost you any money. I am afraid to collect money from you because if I collect it, it will affect the gift and grace of God in my life.”

The cleric insisted Jonathan had not sent him  with the message he conveyed, adding that he had never visited Aso Rock excepting the time he was invited by Former President Sani Abacha after being wrongfully imprisoned for 10 days on the charge of drug dealing.

Guys, 7 Signs to know she will be very good in bed

Ladies, 6 sure ways to become IRRESISTIBLE to men