SHOCK as Oba of Lagos Akiolu issues another threat! 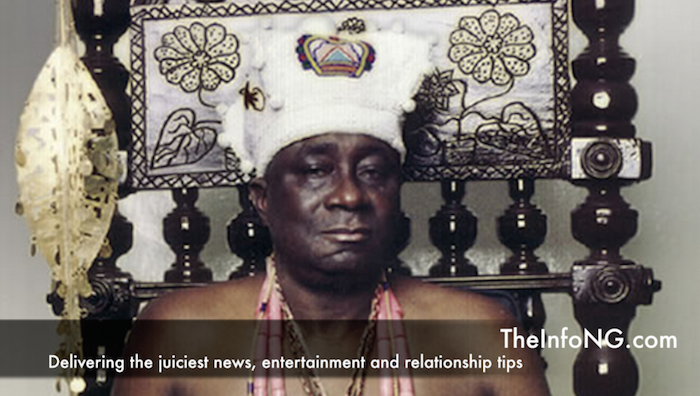 Rilwan Akiolu, the Oba of Lagos, is in the news again, this time threatening to name those who worked against the success of Muhammadu Buhari, the president-elect. According to Channels TV, the traditional ruler, who has been recently under fire over his anti-Igbo comments, made another threat as he spoke at the occasion to mark 2,900 days of the Babatunde Fashola administration.

“A lot of things have been happening now. Some people have been telling Buhari all sorts of things. Awujale and I have decided to meet Buhari because Lagos and South West states must benefit from the Buhari administration.

“People, who are now telling Buhari all sorts of things, are sycophants. They did not want Buhari to emerge winner in the election. These people know themselves. When it gets to a stage, I will name them one after the other. I am not afraid of human beings.”

The same people, he contended, have started pitting the duo of Tinubu and Buhari against each other the same way they set the former against Fashola, This Day adds.

Governor Fashola for his part apologized to those who might have been hurt as a result of his decisions.

“To those that I might have offended, I apologise. For 2,900 days, I was called to make decisions every hour. I made decisions through treating millions of files on issues affecting residents of Lagos. I took those decisions in the best interest of the state. The decisions were taken based on the fact as presented to me.

“I could not have got all the decisions right. It is impossible. To those that we have not reached, please bear with us, the work will never finish. I am sure that our new governor will continue from where I stopped. This is the time to prepare for the change of baton. With the support of the residents of Lagos, your taxes, understanding and perseverance, honest criticism and prayers we may not have come this far.”

It should be recalled that speaking in the course of the launch of his book, after the governorship election, Akiolu insisted that Jimi Agbaje (PDP) would “never be the governor”. He noted, however, that Akinwunmi Ambode (APC) would perform “very well” adding:

“I told many people that Bola Tinubu planted the seed, Fashola came and watered the seed and it started germinating in geometrical progressions. We have just started.”