See the photo of US marine and his bride praying before wedding that has gone viral.. 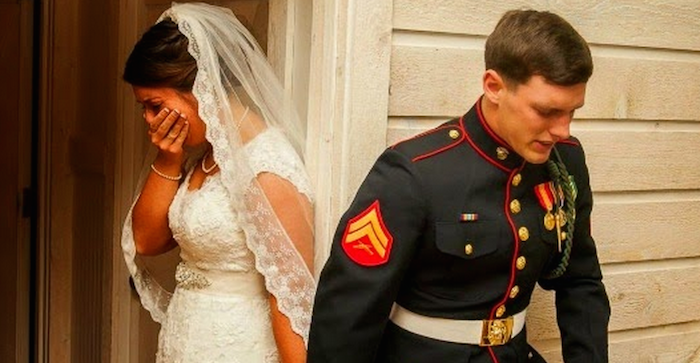 Photo of US marine and his bride praying before wedding: U.S. Marine Cpl. Caleb Earwood wanted a moment to pray with his bride-to-be Maggie before their wedding ceremony on Saturday. Now the photo of the couple holding hands in prayer has gone viral.

The ceremony was about to start in Asheville, N.C., when Caleb went to the cabin where Maggie was preparing for the wedding ceremony. The couple then joined their hands around a corner to not break the tradition of the groom seeing his bride before the altar.

“They hid me in a room and he stepped up on the stairwell and he stuck his hand out and I grabbed his hand,” Maggie Earwood told ABC News.

Caleb prayed for the couple’s marriage, asking that their union be strong enough to serve as an example for young couples, as Maggie held back tears.

“It broke me down,” Maggie said, “to know that we felt the same way about God. It just made me happy.”

The incredible moment was captured by wedding photographer Dwayne Schmidt, who later uploaded it to his Facebook page where it received an overwhelming positive response.

“Beautiful picture. It brought tears to my eyes. The bride is showing some raw emotion and love. You captured how affected she was by his words!!!!” wrote one Facebook commenter.

“This is a great way to start on a journey together,” wrote another.

“So many people are emailing me,” Schmidt said, “saying thank you for sharing this. It’s what America is supposed to be about.”

The couple is currently on honeymoon until they return to Camp Lejeune in Jacksonville, N.C., where Caleb is based.

27 Celebrities that have killed people – You will be shocked seeing this list! (+Photos)