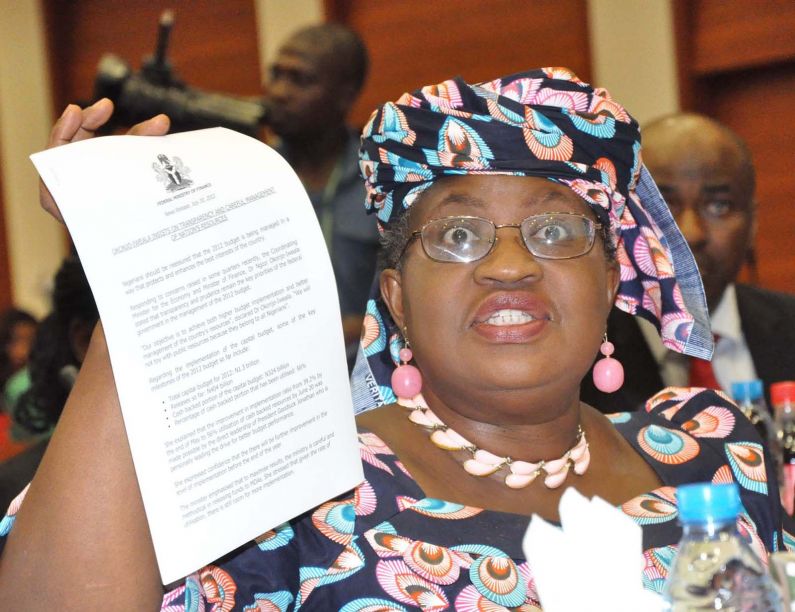 Jun 10, 2021
“We looked at the numbers for the Excess Crude Account. The last time the former Minister of Finance and Coordinating Minister of the Economy, Mrs Ngozi Okonjo-Iweala, reported to the council, and it is in the minutes, she reported by November 2014 that we had $4.1 bn.
Edo State Governor Adams Oshiomhole told State House correspondents after the NEC’s 58th meeting in Abuja.

“Today, the Accountant-General Office reported we have $2.0bn. Which means the honourable minister spent $2.1bn without authority of the NEC and that money was not distributed to states, it was not paid to the three tiers of government,”

According to the economic council, the ‘unauthorised’ spending is among the several anomalies discovered in the management of the nation’s economy between 2012 and May 2015.
Within the period, the Nigerian National Petroleum Corporation was said to have earned a total of N8.1 tn but remitted only N4.3tn.
Due to this reason, the Federal Government has constituted Oshiomhole, Kaduna State Governor, Nasir el-Rufai; Akwa Ibom State Governor, Udom Emmanuel; and Gombe State Governor, Ibrahim Dankwambo, into a panel to probe the NNPC and the ECA between 2012 and May, 2015.
Oshiomhole, el-Rufai, Emmanuel and the Zamfara State Governor, Abdulazeez Yari, jointly briefed journalists at the end of the meeting.
Yari told journalists, through the Director of Funds, Office of the Accountant-General of the Federation, Mr. M.K. Dikwa, that council members received the report of the ECA and unremitted funds by the NNPC.
He said:

“On that line, a four-man committee consisting of the governors of Edo, Gombe, Kaduna and Akwa Ibom states was constituted to go through the books of the NNPC and Excess Crude as well as the Federation Account.

”The four-man committee will check the books of the NNPC, most especially the issue of excess crude and what is not remitted into the Federation Account.

“The Federal Government, in conjunction with the Central Bank of Nigeria, will look inwards to see how to support and how much they will give to states, especially on the issue of outstanding salaries owed by the states and even the Federal Government.”

Explaining what happened at the NEC meeting, Oshiomhole said the NNPC and the Office of the Accountant-General of the Federation were compelled for the first time to provide information on the total sales of Nigeria’s crude from 2012 to May 2015.
The Edo governor said,

“We are talking about transparency; we are talking about change. And what we saw from those numbers, which I believe that Nigerians are entitled to know, is that whereas the NNPC claimed to have earned N8.1tn, what NNPC paid into the Federation Account from 2012 to May 2015 was N4.3tn.

“What it means is that the NNPC withheld and spent N3.8 tn.

“The major revelation here is that the entire federation, that is the Federal Government, the states and all the 774 local governments, the amount the NNPC paid into the Federation Account for distribution to these three tiers of government came to N4.3 tn and the NNPC alone took and spent N3.8tn.

“This is what the Constitution provided for and this is what President Muhammadu Buhari has promised to do; henceforth all money must go to the Federation Account.

“If you were doing that, you would not have a situation where the NNPC alone will spend N3.8trn and remit to the federal, states and local governments N4.3trn, which means NNPC is taking about 47 per cent and that explains all the leakages you are talking about.”

El-Rufai said the account was set up in order to be accountable such that every state and local government would know what they had in the account though they could not spend it.
He said,

“So the decision of the NEC is to set up this committee of four to look at the operations of the Excess Crude Account and make recommendations to council on its future.

“The other thing the committee will do is to look at the operations of the Federation Account, particularly the shortfall and again come back to council with very clear recommendations as to what to do.

“This is an all-governors’ committee; we wear the shoes and we know where they pinch. So we are going to do this as quickly as possible.

“The next meeting of the council is on July 23; we hope to complete our work and be in a position to report to council on that day. So within the next one month, we will be done by God’s grace.”

10 upcoming original movies you just have to see