Robin Van Persie finally joins Fenerbahce, but you need to see what he said about Manchester United! (+Photo) 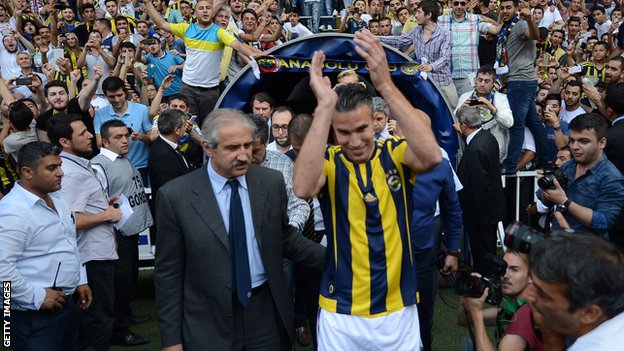 Robin Van Persie finally joins Fenerbahce – Dutch international striker Robin van Persie on Tuesday signed for Fenerbahce from Manchester United on a three year deal, the Istanbul giants announced, in one of the most significant transfers by a Turkish Super Lig side in recent years.

What are Sports Betting Odds? – Definition and…

An estimated 18 000 fans clad in the iconic navy blue and yellow stripes of Fenerbahce turned out at its Sukru Saracoglu stadium in Istanbul to witness van Persie’s signing ceremony, chanting his name and letting off flares.

Reports according to BBC SPORT:

The striker, 31, ended a three-year stay at Old Trafford to join the Turkish side for an undisclosed fee.

He said: “It’s part of football, it’s part of life. It was a situation where I could see it coming, if I’m really honest.”

Van Persie added that he “got used to the idea” of leaving United.

He said: “I had a good moment with the players the day before I came to Istanbul so that was special. Then you see that everyone really appreciated my time there, that was important for me.”

The Netherlands international, who praised the “very classy” way in which his transfer was handled by Manchester United chief executive officer Ed Woodward, was unveiled in front of about 10,000 Fenerbahce supporters inside the club’s stadium.

He told them: “I promise you one thing – I will do everything in my power to help Fenerbahce win as many trophies to make you happy. Let’s do it together.

Will President Buhari fulfill his promise to pay poor Nigerians N5,000?? – Find out!