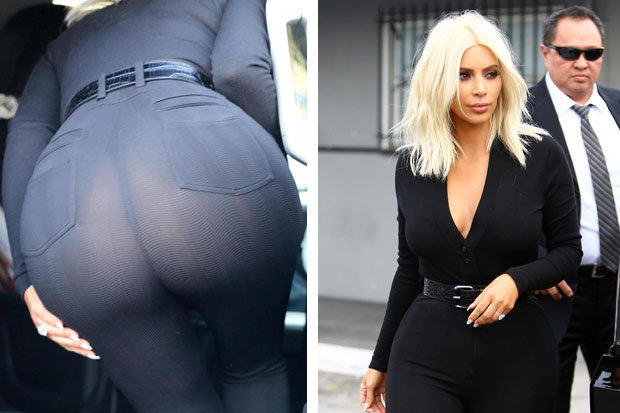 Hottest Kim Kardashians’s booty shots – By now, you’ve probably seen the shocking photos of Kim Kardashian in her latest attempt to, as she puts it, “break the Internet.” As reported in Huffington Post and UK’sDaily Mail, the revealing spread she recently did for New York’s Paper magazine shows off sexy shots of her amazing rear that leave little to the imagination.

Well, if she doesn’t bust the Internet, that photo shoot is probably already making a lot of guys bust something else.

Her bedroom eyes and bare thighs say it all in this famous spread for GQ magazine. Obviously, there’s nothing like the comforts of home to let it all hang out. But even with a huge bed, we have to wonder if there’s enough room for all 3 of them … Kanye, Kim and her derriere.

Looks like the SS Gluteus Maximus just shipwrecked on this luxurious Thai beach. Tragically, it looks like Kim was the only survivor. Sadly, it appears that most of her clothes didn’t even make it. The good news is that we know a few guys who are willing to administer some emergency CPR.

Always on the forefront of fashion, here’s Kim rocking a hot (and tight) Givenchy dress. Kimmy K has consistently said that she has a “love-hate” relationship with the designer, but from the looks of how much she’s giving that fabric the ol’ stretcharoo, we’re thinking that dress is saying “hate.”

We’re all familiar with Kim’s love of the beach. Between the hundreds of stalking paparazzi and her own endless love of selfies, it seems like she’s always playing in the sand or the water. But when she hops on that surfboard, let’s just hope that gorgeous booty doesn’t throw off her balance.

6 Dirty tricks some men use to get women to sleep with them – Beware!