4 year old boy forced to join ISIS, given sword to behead his own mother (+Photos) 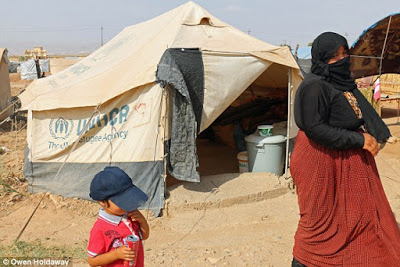 Boy forced to join ISIS: A Yazidi mother has told how her four-year-old son was taken from her to join an ISIS terror training camp where he was forced to learn passages from the Koran, Sharia Law and even given a sword and taught how to behead his own mother.

”If anything happens to my children, I will hold…

Aug 28, 2020
Bohar, not her real name, could do little but watch as her young son was handed a sword by their captors, who told him ‘this is to kill your mother’.
Later, he revealed they were training him to chop people’s heads off, shoot guns and hate his own people, at an age when most children around the world are just learning to read.
Her son was never forced to carry out the perverted act, but his mother is adamant if her son had stayed he would have been forced to kill for ISIS.
In an exclusive interview, Bohar, 35, said: ‘ISIS trained my son to learn the Koran, how to speak Arabic, how to pray and how to use a sword.’ 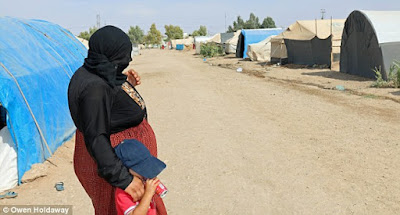 Speaking from a refugee camp in Dohuk, northern Iraq, Bohar said: ‘They told him that Yazidis are Kafir, Arabic for ‘non-believers’ and told him he had to fight them.
‘This one time the ISIS man gave him a sword and said this is to kill your mother.’
Bohar, her son Hamo, not his real name, and her three other children were captured by ISIS last August, just south-east of Sinjar Mountain.
Unable to flee, they were imprisoned with 2,000 other Yazidi, from where they were shunted between prisons in Tal-Afar and Badush in Mosul – as evil ISIS militants decided their fate.
‘In Badush prison ISIS took my eldest daughter and my eldest son who is 12. They took them to Syria,’ she said.
‘Some friends later told me my daughter and son were taken to Raqqa, where I believe they still are,’ she added. 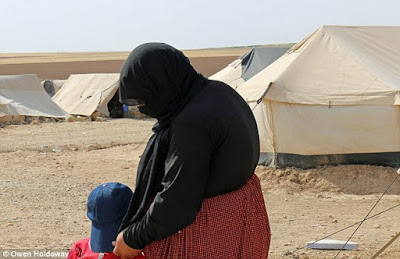 Bohar managed to keep her two youngest children – a daughter, 14, and the little boy, Hamo – with her as they were shunted between the two cities.
But keeping them safe from the warped acts of their captors was almost impossible.
‘In Tala-Afar prison, ISIS put urine in the water tank, and food with glass in it. They wanted to hurt us,’ she said.
In August, when the coalition airstrikes began, things got far worse.
‘ISIS fighters there beat us very badly, especially when they saw the US airplanes,’ she explained.
At one point, the mother of four was moved to an abandoned village, where they got one hot meal a day – but the food was laced with morphine to make them feel drowsy and prevent them from escaping.
Those who managed to attempt an escape – or even use a mobile phone – were killed mercilessly.
Bohar watched as one man was murdered in front of her by ISIS soldiers who then paraded his body in the street and demanded to know if anyone knew him.
In November the prisoners were moved to the ISIS de facto capital of Raqqa, in Syria.
There, in the prison camp for the first time in months, Bohar caught a glimpse of her eldest son.
The boy, 12, was with around 250 other children being forced to learn the Koran, taught about ISIS’s enemies and trained up as soldiers.
However, Bohar’s son was rebelling.
She said: ‘I saw him on this military base. I saw them beat him because he did not accept the rule of ISIS,’ she recalled.
In Raqqa Bohar and her two remaining children were put up for sale at an ISIS people slave market.
There, she was separated from her daughter when she was sold to a militant.
Her voice cracking with emotion, she said: ‘They took my daughter, she was just 14-years-old, an ISIS man bought her.’
Bohar and her son were bought by a Syrian man, after being held in a ‘prison that was under the earth’.
‘He was very bad to us, he did not give anything to us, he never opened the fridge for us,’ she recalled.
‘I wanted him to sell me back to my family, but he refused…I asked him if he bring my other daughters and son here, but he [also] refused.’
After two months, Bohar and her son were sold once more, this time to an older Saudi Arabian fighter called Omar Al-Najde, a high-ranking ISIS commander.
Al-Najde made Bohar work as a servant with two other teenage Yazidi girls, and took Hamo to the jihadi training camp to indoctrinate him.
Al-Najde forced Hamo to learn the Koran, Arabic and to pray.
The boy’s training involved being taken to an ISIS military base, where he would learn fighting skills such as how to use a pistol, a hand grenade and a sword.
The indoctrination continued for four months, before Bohar and the girls, finally managed to flee across the border to Turkey.
Even now, safely in a refugee camp where they are reunited with their father, he still refuses to talk about what ISIS made him do.
But he has given his family one chilling insight into his months under the control of the fighters: when asked what they taught him, he drew his finger across his throat.

11 male celebrities who men admire a lot (With Pictures)