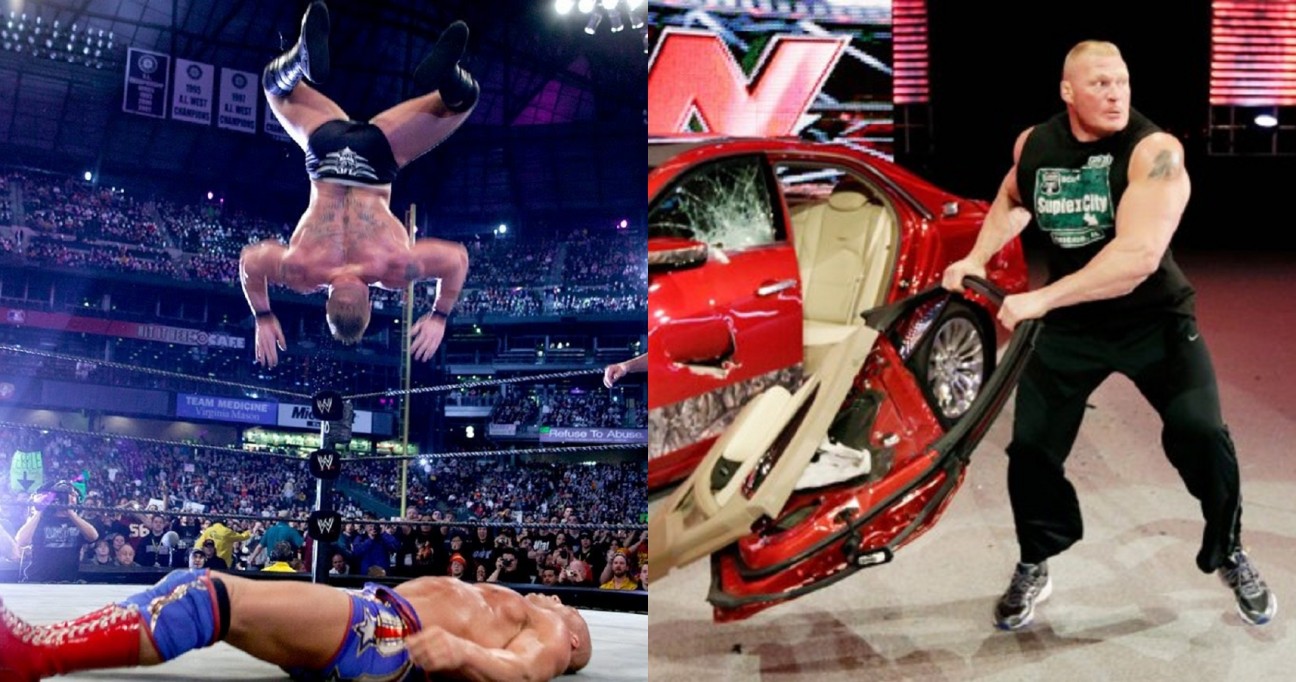 Brock Lesnar moments: Destruction (noun): the action or process of causing so much damage to something that it no longer exists or cannot be repaired. The Merriam-Webster Dictionary might want to adapt their definition to include mention of Brock Lesnar. He’s spent his career breaking not only others, but also himself.

The former WWE and UFC champion has a collection of fantastic moments over his amazingly diverse career, but he’s had his fair share of mistakes as well.

There’s a reason why Paul Heyman calls him “The Beast”: sometimes he just doesn’t fully realize his own strength and speed. Take, for example, the time he ever so gently tossed a car door from the ramp area – you wouldn’t believe where it landed. Brock, himself, seemed surprised at his ridiculous power, staring just a second longer to see how far it went.

“The One in 21-1” has had crazy moments, not only with WWE, but UFC and even in the NFL. When he decided to try out for the Minnesota Vikings, a mass brawl was set off by, you guessed it, Brock Lesnar.

Brock only knows destruction, and with no fear – or no known cognizance of his own mortality – he lays it all out on the line every time he steps into a ring, cage, or on a field. Hope you’re ready for blood, broken bones, and beer… yes, even beer.

Although it may seem like Brock is a dangerous worker, that couldn’t be further from the truth. His gimmick demands a higher level of brutality, and through his athleticism, he does a pretty good job at keeping things in the ring relatively safe. Not to say mistakes don’t happen, like during an episode ofSmackDown, when Brock took on A-Train, also known as current NXT’s Head Trainer, Jason Albert.

The match itself went pretty smoothly and when it was time for Brock’s big finisher, well, A-Train literally was dropped on his head. All the weight of his body came crashing down on his neck/back of head, and it’s amazing that serious injury wasn’t done to him.

In the video, watch Cole and Tazz’s reactions in the background. You know it’s bad when the announcers are flinching and throwing their hands in the air.

In April of 2012, Lesnar returned to the WWE to “bring legitimacy back to the company” according to then Raw General Manager John Laurinaitis. Brock was immediately put in a feud against John Cenaas they would eventually face off at Extreme Rules.

At a Raw Supershow, the two superstars came face to face in the ring. Nothing was said; instead, Cena slaps Lesnar right in the face, and in return, Lesnar shoots at Cena’s legs, taking him down immediately. It’s tough to say exactly when Lesnar busts open Cena’s face, but looking at the video, it’s most likely the very first punch he lands. Squarely popping him in the mouth, Cena flinches slightly as the two continue to brawl on the mat.

When they are finally separated by basically the entire roster, Cena’s green shirt has red all over it, along with a nasty busted lip that quickly swelled up. Never one to quit, Cena appeared later that night for backstage promos, swollen, bloodied lip and all.