See how President Buhari was humiliated in New York.. 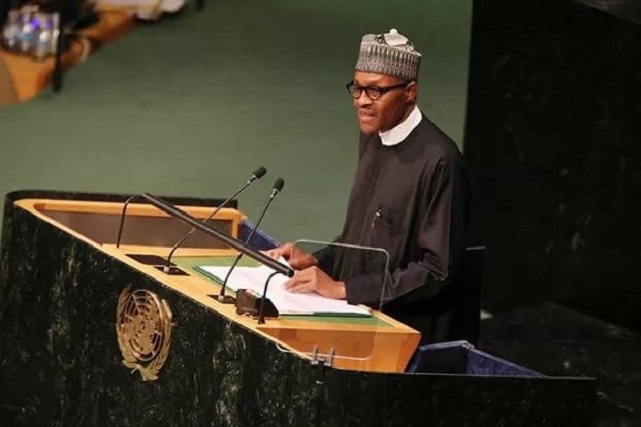 How President Buhari was humiliated in New York – The Cable reports that mismanaging resulted in several missed opportunities and uncomfortable moments for Buhari and his official team.

Naij.com has reported earlier that the president missed a very important session on Boko Haram insurgency.

He was also stopped from meeting with Pope Francis because he was not correctly briefed by the Nigerian UN mission personnel.

The pope delivered a speech at the general assembly on Friday, September 25.

Not only was Nigerian leader made to come in late to the event because of messy preparations, he also took a wrong gate rather than the one kept for presidents and heads of state.

Buhari was then stopped from seeing the pope by security staff because of his late coming.

The president came in while other heads of state and government had already lined up to shake hands with the pope, and he was stopped by security operatives from joining in.‎

The presidency had sought to clarify the missed meeting as not being part of the official meeting scheduled for Buhari.

“The meeting at which Nigeria was reportedly absent was not one of the official events of the United Nations for which President Muhammadu Buhari and his modest delegation are in New York,” Garba Shehu, a presidential spokesman, had said.

The focus was also on the Lake Chad Basin and the effects of the terrorism to which Nigeria’s full contribution was awaited.

The listed UN meetings had the item: “The Office for the Coordination of Humanitarian Affairs (OCHA) will hold a side event on food security and humanitarian consequences of conflicts-driven displacement in the Lake Chad Basin region.”

It was arranged for 3pm US time (8pm Nigerian time), but Buhari’s programme organised by the Nigerian mission did not point it out as one of the meetings he should attend.

‎Witnesses to both events defined as “embarrassing and unacceptable” the attitude of the Nigerian mission team which led to media backlash back home and on the social media.

The witnesses also accused the presidential media team of rushing to the press to defend ‎Buhari’s nonappearance at a very vital meeting whose talk was on a matter in which Nigeria has been worst hit by the activities of the terrorists.

However, the event the Nigerian president ultimately attended in place of the one on the insurgency was not only poorly attended but was full of protocol breeches, as Buhari was already seated before other speakers commenced strolling in.

President Buhari has arrived New York on Thursday, 24, late at night. Nigerian leader is accompanied by 21 politician as his official team.

The UN General Assembly, which comprises all 193 members of the global organisation, provides a unique forum for multilateral discussion of the full spectrum of international issues covered by the Charter.