If Buhari hears what Eedris Abdulkareem said about him during Felabration2015.. There might be problem! 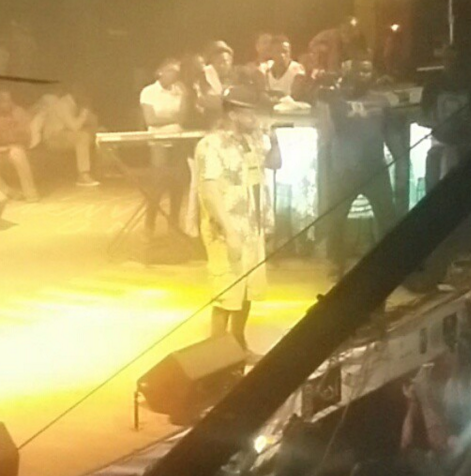 Eedris Abdulkareem is no doubt one of the most controversial rapper to ever come out of Nigeria. This time The Mr. Lecturer hinmself, Eedris Abdulkareem has decided to drop another thunderbolt. Y’all remember when he rapped about Nigeria yeah? Nigeria Jagajaga, Eedris is known to always say whatever he feels how he feels like about the Government just like Fela Anikulapo Kuti.

During his Performance at #Felabration2015 tagged “Just Like That” He took us back in time to 1976 when Buhari was the was the federal commissioner (minister) for petroleum during Obasanjo’s regime.

Femi Kuti quickly ran to the stage to stop Eedris Abdulkareem from naming his ‘government haters.. see pictures below….

Fela had many issues with the Government when he was alive, and Politicians were not his friends at all. Buhari’s government eventually charged Fela for currency-trafficking offenses, found him guilty and sentenced him to five years imprisonment. He only regained his freedom when Buhari’s successor, Gen. Ibrahim Babangida granted him pardon two years later….

Fela sang about it in Army Arrangement, It was one of the most popular songs Fela Anikulapo Kuti sang.