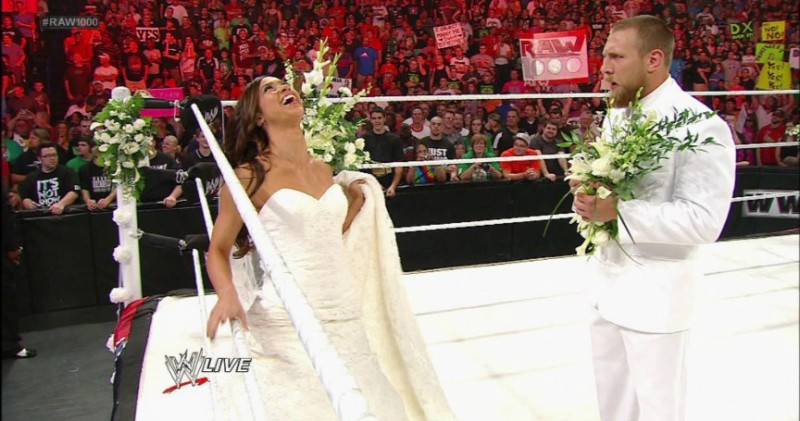 WWE weddings that were a mess from the start – Marriage by definition is the legal or religious ceremony that formalizes the decision of two people to live as a married couple.  Marriage in the professional wrestling world (at least in story lines) is defined by chaos.  If you look at the history of weddings in the WWE, not a single one has gone without a hitch because otherwise that would be quite boring.

Over the course of 21 years within the WWE, there have been 16 wedding ceremonies that were put together for television and each and every one of them did not go off without a hitch.  From snake bites to “foxy” wedding planners, there has been something interesting that has happened to completely ruin a ceremony.

After the Attitude Era had come and gone, it seemed like the WWE went crazy with weddings with five weddings over the course of three years.  After that period, the weddings have slowed down dramatically with only two since 2008.  One reason for this could be the fact that we know who is with each other in real life thanks to the access we get with the internet and social media.

Weddings within the WWE have come in all shapes and sizes.  There was a wedding of true love, there was one that was more of a sacrificial ritual than a true wedding, there was one that was ruined thanks to a drive-thru wedding preceding it, there was even a ceremony between two men well ahead of its time in the national spotlight.  Also, who could forget Lita and Edge being involved in more than one wedding?

While there have been more than 10 weddings in the history of the WWE, the following 10 within this article stand out for various reasons.

Many may think that the wedding between the “Macho Man” Randy Savage and Miss Elizabeth was the first for the WWE, but it was actually the second one.  The very first one took place on Saturday Night’s Main Event between Uncle Elmer and Joyce from the Hillbilly Jim camp.

Miss Elizabeth was the valet and manager for Savage from basically his beginnings in the WWE back in 1985.  He was the hot free agent that all of the hot-shot managers wanted to get in their fold including Bobby Heenan, Jimmy Hart, and “Classy” Freddie Blassie.

The wedding took place at the SummerSlam pay per view in 1991.  In a rare moment for the WWE weddings, the ceremony itself did not have any incidents; however, at the reception, there was a gift from Jake Roberts that contained a cobra that took a nice healthy bite out of Savage’s arm.