Finally, Di’Ja opens up on relationship with Don Jazzy (Read) 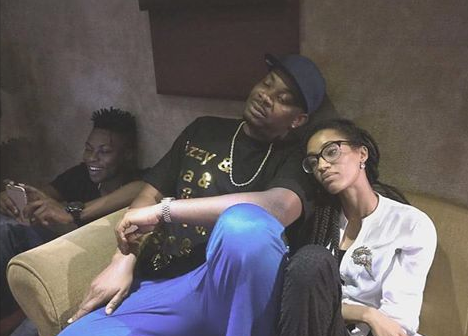 Di’Ja opens up on relationship with Don Jazzy – Beautiful Mavin artist music artist Di’ja has been in the news for a while now following her controversial traditional wedding ceremony held in Kaduna state. In an interview with City People Magazine, Di’ja opened up on her relationship with Mavin Records boss Don jazzy, described her kind of music and hoe her parents embraced her music.

Video: Married women are in my DM – Don Jazzy reveals

People sell my contact to strangers to beg me for money –…

When asked about how her relationship with Don Jazzy, Di’ja disclosed that:

“Meeting Don Jazzy, I felt like I was reborn. I met him through my manager. He told we were going to see a producer, I didn’t know where we were going so we ended up in Don Jazzy’s house. I didn’t even know where I was. I ended up meeting Baby Fresh, Altims and a few others. They started listening to songs that I had done before and I had this nervousness in me. Not long after, I saw a shadow behind me and when I turned around to see who it was at the door, it was Don Jazzy and I almost fainted, I just told myself to stay composed. It even got worse when Don Jazzy started listening to my songs, I just got so nervous. He told us he would get back to us and the next day he pulled a call through and that was it.”

On when she finally signed on to Mavin Records, Di’ja said: “We started recording and we recorded quite a few tracks. At that time nobody was bothered about a contract or papers, we just wanted to work. From there I met Reekado and then Korede Bello. We didn’t even know there was a plan; we were just happy working and enjoying each other’s company. We recorded for about 8 to 9 months at that time before Don Jazzy even considered giving us a contract.”

Speaking on how she chooses her kind of music, Di’ja disclosed that she enjoys been herself anytime she is about writing her song and it can take her up to five years to finish song.

She said: “I didn’t, like I said I just became myself. I can write a song for 5 years. I still have songs that I haven’t finished writing since 2008. This is because there’s just this thing about been yourself. Write your songs as they come from your heart. I like been crazy and I experiment my craziness while recording.”

“Sometimes I would be like Altims or BabyFresh please commot that thing and they would be like they love it and I should do it again. Sometimes I would beg them to take it off and when Don Jazzy walks in I would be like a little disturbed and he would encourage me to be crazy, be free and be myself, he would say be stupid, it is actually trying to be stupid you find your smartest moment. Because it is during that moment of been stupid you would realize something that would pay off. I think Music comes with a form of madness. You just have to be free, crazy, stupid and yourself. Don’t try to please everyone, please yourself even if it takes you to be crazy.”

Pastor T.B Joshua proposed to me first day we met and.. (Must Read)