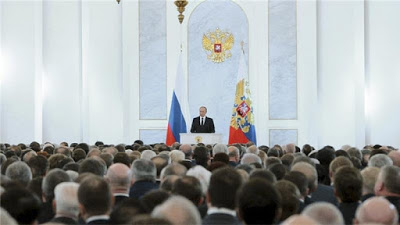 Delivering his annual state of the nation address today, Russian President Vladimir Putin said Russia will not ignore what he described as Turkey’s “aiding of terrorists”, adding that the November shooting down of the Sukhoi Su-24 plane was a “treacherous war crime”.

He said Turkey will ‘more than once’ regret shooting down the Russian jet near the Syrian-Turkey border.
Putin also called for a broad international front against terrorism, an end to what he called double standards and halting any backing of what he called “terror groups”.
Russia have already banned importation of fruits  and vegetables from Turkey and already deported several Turkish business men.
“We are not planning to engage in military sabre-rattling [with Turkey],” Putin said. “If somebody thought that after committing a treacherous war crime — the killing of our people — it would be possible to get away with mere restrictions on the trade of tomatoes, or some other restrictions … then they are grossly mistaken,” Putin said.
“We shall remind them many times about what they’ve done, and they will regret what they’ve done for a long time,” he said. “We know what needs to be done.”
It appears that Allah decided to punish the ruling clique of Turkey by depriving them of wisdom and judgment,” Putin said.
He criticised Turkey, accusing it of buying oil from the Islamic State of Iraq and the Levant (ISIL) group.

“We are fighting for justice, happiness and the entire future of our civilisation. We have to be prepared and we have to defeat them [terrorists] before they get here that’s why we launched this operation in Syria.”