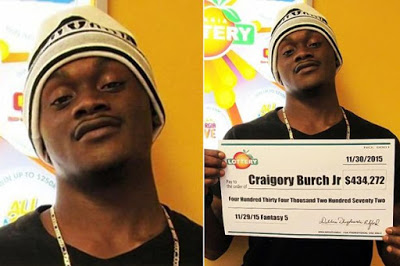 Lottery winner murdered: A young lottery winner has been murdered during a robbery at his home.
Craigory Burch Jr, 20, scooped almost half a million dollars in the Georgia state lottery Fatasy5 draw in November. On Thursday night, armed raiders broken into Burch’s home, where he was with his girlfriend and children, WALB reported.

The three masked robbers burst into the property and held Burch at gunpoint and demanded his wallet, girlfriend Jasmine Hendricks said.

Burch is then believed to have thrown his trousers at the gunmen, who rummaged through the pockets looking for his wallet.
When they failed to find it, they reportedly shot and killed him before fleeing.
Hendricks fled and raised the alarm, she told the station.

Police are still hunting the suspect.

His family said he used the money to buy Christmas presents for those in need.