Top Nigerian celebrities whose wives are older than them [With Pictures] 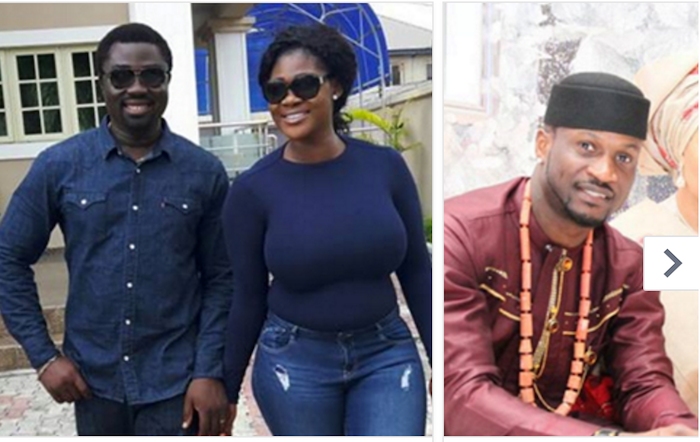 Before their separation, they were so much in love despite the fact that Queen Ure was 11 years older than Soul E.
In one of their major interviews years ago when they were still very much in love, they both addressed their wide age gap thus:

Did you consider his age at that time?

Did he tell you?

URE: Well he added a few years to his age.

What do you have to say about the reports that you are fond of dating older women?

SOUL E:I don’t have anything to say about it, it is my life. I have always known that it would happen; I’m too big that’s why I attract people that are older than me. I told my parents when I was growing up that I don’t know- then, I had two serious relationships and all of them were older than me. I knew right from the scratch that I was going to end up with someone older than me.

What of maturity factor? Some guys like to date older women because they are not mature, is your case like that?

URE:Let me answer that, someone canbe so mature that the people that you relate with are the people that think like you. You don’t find those kinds of people even among your age mate.

Soul E: All the friends, I had from secondary school days to my polytechnic school days allthe friends I had were all older than me. I’m talking about ages like 45, 50 and when I talk;they listen both male and female. When I talk they listen. I could remember in 1995, I called my mother and told her; I’ve a strong feeling that the person I’m going to end up with is going to be older than me.

Now, what would you do if after the looooooonnnngg search for your other half you discover she is older than you or you are older than your man

Ice Prince and girlfriend ‘Maima’ all loved up.. (See Photo)