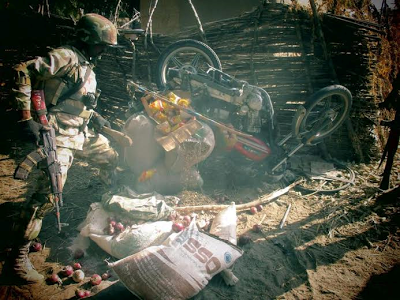 “The Nigerian Army has continued its offensive operations of destroying all Boko Haram terrorists remaining camps and enclaves around Alagarno and Sambisa forests.

In response to a distress call of an attack by Boko Haram terrorists on Kuda village along Butuku road, troops of 143 Battalion swung into action, unfortunately the terrorists fled after setting the village on fire that led to the death of an elderly woman. The escaped insurgents regrouped and attempted to cross through Magar bridge but they were pre-empted by elements of the Battalion who killed 2 terrorists and wounded several others. Sadly, 3 soldiers and 4 locals sustained injuries, while the troops recovered 1 Toyota Buffalo vehicle mounted with an Anti-Aircraft Gun with registration number 081375, one General Purpose Machine Gun (GPMG) with registration number 132042, a loaded G3 rifle magazine and 30 rounds of 7.62mm (NATO) ammunitions link. Both military and the wounded civilians are receiving treatment at the unit’s Regimental Aid Post.

You are please requested to disseminate this information and attached photographs to the public through your medium. Thank you for your usual cooperation.”

GUYS: 7 Signs the woman you’re with is controlling your life..